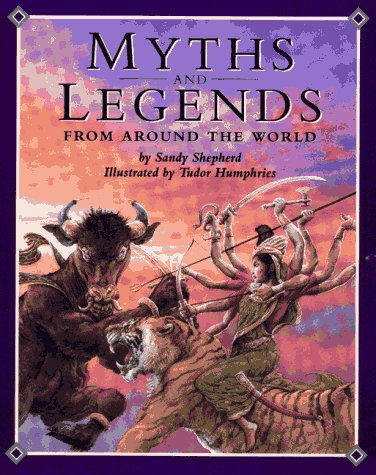 Myths and Legends from Around the World By Sandy Shepherd

Hundreds of myths from around the world

This is an old children’s book I found buried deep in my library from decades ago. It has fantastic watercolor drawings and is very well made. The myths themselves include both major ones (for example the Odyssey is covered) as well as some more obscure ones (like the Tahitian creation myths).

Is this book complete? No, not at all. It only tells a mere fraction of the myths from different religions around the world and misses some major ones entirely. It doesn’t mention any of the Abrahamic myths, or the Buddhist ones, for example. This is clearly a child-safe version of world myths, aimed at children ages 8-12.

While the myths themselves aren’t up to snuff by my adult standards, the artwork is fantastic, so good it could be hung on a wall. If you have a kid check it out.