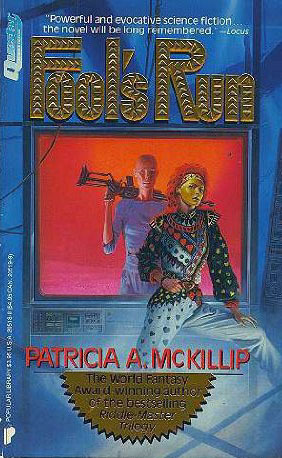 Fool’s Run By Patricia A. McKillip

Description: Seven years ago, Terra Viridian obeyed a vision and killed 1,500 innocent people. She was sentenced to the Underworld prison. Now, a new age band, led by a psychic pianist and a masked woman called the Queen of Hearts, arrives at the prison to perform. And Terra’s vision is moving closer, changing all their lives forever.

Terra Viridian was the most dangerous person ever, until she was locked up in a prison space station. Haunted by mad dreams, she waits in the dark for the end of her visions.

Patricia McKillip is more widely known for her work in the Fantasy Genre, but she wrote this book of sci fi thirty years ago. She is an author who uses hauntingly beautiful prose, colorful descriptions and unnerving events to tell her stories. She’s been one of my favorite authors, if not my favorite author, since I was very young. After reading this I wish she had written more sci fi, because this was very good.

This is the story of Terra Viridian, the mad woman who killed one thousand five hundred people using only a laser rifle; the Magician, a piano virtuoso who’s psychic visions makes him hard to bluff at poker; and the Queen of Hearts, a mysterious drummer who wears a mask of gold and only goes by her stage name. All the characters were fantastic, well drawn out. Even the minor characters had their delightful quirks, such as Quark the street urchin-turned-vocallist who swears in French and has a rainbow collection of fingernail polish.

This book echoes the tale of Orpheus, the musician who charmed the god of death into letting his beloved free. The main characters are all musicians in a band together, and they get the gig of a lifetime to play in the Underworld, a space station prison. Everything goes horribly wrong when Terra stages a prison break during their concert, and the musicians lead her out of the Underworld.

This was almost one of the best scifi books I’ve ever read. But I found this book’s ending to be unsatisfying. The creepy alien visions Terra has been following for the last seven years just kinda… ended. There was no resolution to that plot line, besides Terra’s untimely demise. The book was a slow starter, and the ending fell flat for me. Unfortunately I think endings can be one of McKillip’s weak points (to this day I have no idea how ‘The Sorceress and the Cygnet’ ends, and I’ve read that book three times).

If you’re in the mood for old school scifi with excellent characters and psychic visions, give this book a go. It’s long out of print by now, but you can find it cheap from your local used book store (like I did) or from Amazon.