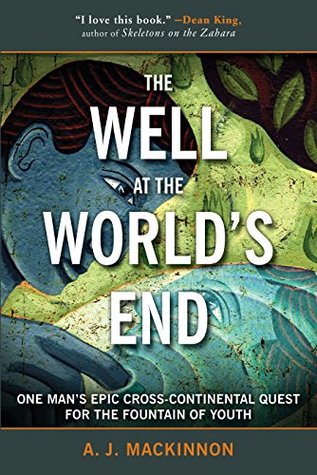 The Well at World’s End: One Man’s Epic Cross-Continental Quest for the Fountain of Youth By A. J. Mackinnon

Description: When A. J. Mackinnon quits his job in Australia, he knows only that he longs to travel to the well at the world’s end, a mysterious pool on a remote Scottish island whose waters, legend has it, hold the secret to eternal youth. Determined not to fly—he claims it would feel as though he were cheating—he sets out with a backpack, some fireworks, and a map of the world and trusts that chance will take care of the rest.

Traveling by land and sea, train, truck, horse, and yacht, Mackinnon travels across the world, getting caught up in a series of hilarious, sometimes surreal, adventures. He survives a near-fatal bus crash in Australia, accidentally marries a Laotian princess, is attacked by a Komodo dragon, and does time in a sketchy Chinese jail, among many other mishaps and misadventures along the way. Each new continent and each new mode of transport brings the possibility of a near-miss or happy accident, all on the quest for eternal youth. This is the astonishing true story of a remarkable voyage.

The zany, and almost fantastical journey of one man across the world

To be quite blunt I bought this book thinking it was another book of the same name. I was expecting an over 150 year old fantasy novel, and instead got a memoir. Oh well!

This is the memoir of an English Teacher, in his adventures travelling on foot from Australia to England. This is a memoir, but I’m 95% certain that this book contains at least one or two embellishments. He sails from Australia, to Laos, travels across China, until he gets to Venice and then finally England. In the book he confronts Komodo Dragons, barely escapes bus crashes, gets lost in Greece and more. He gives marriage counseling to a travelling couple, travels to ‘uncivilized’ nations in Asia and attempts to survive without money or resources.

The author’s voice is very fun. At times the ‘plot’ of this memoir almost ventures into slapstick levels of impossibility. If you’re in the mood for a joyous memoir, I would recommend this one.

Audiobook Notes: The narrator did an good job, imitating Scottish, Irish and German accents. They weren’t excellent accents, but he did try and I give him bonus points for that. If I have one reservation it is that he didn’t give the protagonist an Australian accent.