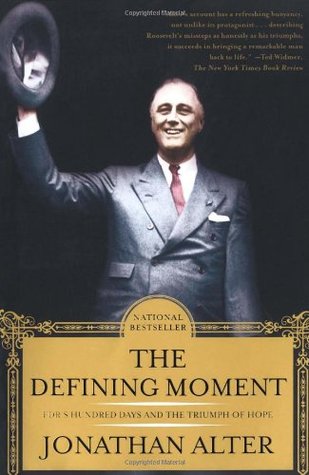 The Defining Moment: FDR’s Hundred Days and the Triumph of Hope By Jonathan Alter

Description: This is the story of a political miracle — the perfect match of man and moment. Franklin Delano Roosevelt took office in March of 1933 as America touched bottom. Banks were closing everywhere. Millions of people lost everything. The Great Depression had caused a national breakdown. With the craft of a master storyteller, Jonathan Alter brings us closer than ever before to the Roosevelt magic.

Hope and Grim Reality Collide in the Great Depression. Only Franklin Delano Roosevelt can save the nation from annihilation.

This was an excellent read. The author portrays FDR as a mixture of a cheerful messiah swooping in at just the right moment, and a political snake who is in part at fault for the US’s banking situation getting bad in the first place. Paralleling the 2008/2009 fiscal crisis where bankers were partially at fault for international crisis, the events described in this book are still relevant to this day.

I’m going to keep this review short because I doubt anyone really cares about history book reviews.

This book portrays FDR in a mixed light, on one hand imperturbable but also canny enough to not be pinned down by his political rivals. Reading between the lines I’m left with the impression that he used up his allies and turned a good number of them into enemies. He deserves a lot of credit for his charisma, but he seemed to have been a poor manager and friend.

Eleanor is portrayed in a sad light. Betrayed by an unfaithful FDR, she is unhappy in marriage. With an over controlling mother-in-law, she’s unable to raise her children how she wishes. She never wanted to become First Lady, and is forced to move away from her friends in New York when she moves into the White House.