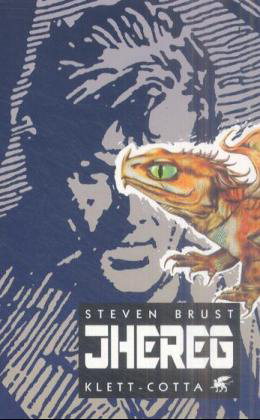 Description: The first to be published, this is actually the fourth novel in the timeline of the VLAD TALTOS series. The books recount the adventures of the wisecracking hired killer Vlad, a human on a planet mainly inhabited by the long-lived, extremely tall sorcerers known as the Dragaerans. One of the most powerful bosses in the Jhereg–Dragaera’s premier criminal organization–hires Vlad, one of their guild members, to assassinate Mellar, who stole millions from the Jhereg leadership and fled. Unfortunately, this thief turns out to be protected in a way that makes it difficult for Vlad to do his job without gaining the permanent enmity of a friend. The reader also learns more about Vlad’s past in this, and in other, lives.

Vlad and his bff Lorash must track down and kill a man who double crossed the world’s most powerful crime bosses. The only trouble is the man he’s tracking down is a 500 year old elf.

This is a re-read for me, as I wanted to refresh myself about this series before I read the next book in the series.

This book reminds me of Jim Butcher’s Harry Dresden in terms of tone, wit, plot style, combat and character interactions. If you like Jim’s work but want to read some High Fantasy instead of Urban Fantasy, try this on for size.  This book is fun. With fun characters, an enthralling setting and a gripping plot, Jhereg is great.

The book throws you in deep from page 1. Similar to the Malazan series for a lack of a ‘tutorial’ beginning, throwing all sorts of worldbuilding at you without mercy for your confusion. Jhereg entices you to read despite the confusion because it is easy to see familiar mystery tropes and elements. Vlad works for a mafia as a minor gang boss/assassin/witch. He has a mini-dragon as a familiar which is equal parts helpful, snarky and hilarious. He has a rogues gallery of allies whom he employs in the execution of this plot, similar to the Scooby Gang from the Dresden Files.

One thing I found was weird was the use of 2nd person limited. Can’t say I stumble across too many books like it too often. It wasn’t bad, indeed it worked well, but it tripped me up a bit.

The plot was an assassination plot hired by a magical mafia against another magical mafioso. I liked the mundane-yet-strange element of it.