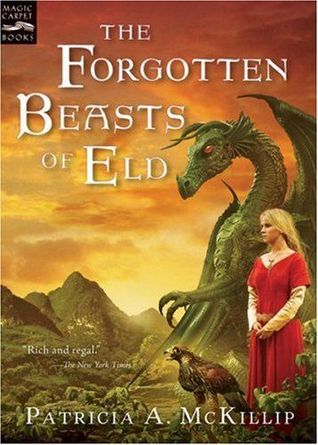 The Forgotten Beasts of Eld By Patricia A. McKillip

Description: Sixteen when a baby is brought to her to raise, Sybel has grown up on Eld Mountain. Her only playmates are the creatures of a fantastic menagerie called there by wizardry. Sybel has cared nothing for humans, until the baby awakens emotions previously unknown to her. And when Coren–the man who brought this child–returns, Sybel’s world is again turned upside down.

I’ve read this book more times than I can count over the years, and always get something new out of it. This time, this book’s sub-theme of rape and compulsion seemed more au courant than ever.

This book’s characters and plot aren’t very realistic, and they’re not supposed to be. They’re archetypical. They’re prototypical. This is a very adult fairy tale about the price of power, and how hate can corrupt us.

Sybel isn’t a very realistic person. She’s so much a loner that we’d call her a hermit by our modern standards- and yet she’s perfectly able to transition into being the center of attention in the middle of a city. Coren isn’t realistic. He loves Sybel despite the fact that she lies to him and betrays his love several times. The plot is almost Shakespearean in it’s inevitability. The good guys win, the bad guys lose, but the good guys must sacrifice dignity and love to succeed.

Ordinarily I frown upon unrealistic plots and characters… but McKillip’s style and prose makes things work. She turns what is the cliché into the fantastic, what is a trope into heartache. It just goes to show there’s not one right method to writing a book.

You should read this if you want to read an old(ish) book which is extremely relevant to the post-MeToo world.