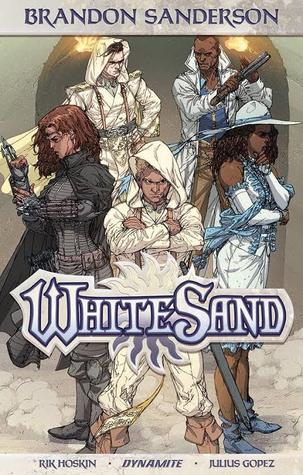 Following the loss of most of his colleagues in a violent ambush, Kenton has become Lord Mastrell of the few remaining Sand Masters, magicians who can manipulate sand to do their bidding. With the ruling council poised against him, the hot-headed Kenton must become a diplomat to have any hope of preventing the eradication of his people forever. However, there’s another complication: assassins are coming for him from all directions, and Kenton’s only true ally is Khriss, a visitor from the other side of the planet who has an agenda of her own to pursue.

This book was a lot better than the first graphic novel in the series. This book’s scope was a lot smaller, focusing on the Diem of the Sand Masters exclusively and the desert city where the Masters live. The characters all return from the first book, and are now all working together towards re-establishing the Sand Master school.

The first five chapters of this book had a lush, detailed  artstyle which served to breathe reality and believably to this Cosmere graphic novel. The final chapter was drawn by a different artist who had a more traditional graphic novel style which brought clarity and virve to the story. On the whole I preferred the original artist because the detail was amazing.

This graphic novel’s plot is slower and more centralized in this graphic novel as compared to the first. Where the first book was all over the place following three different characters around different parts of Sandland, now all three characters are brought together and working together in the city. While this has some disadvantages, namely we barely got to explore the worldbuilding for the larger setting, the audience got a better understanding of the depths of the city itself. More, as we weren’t trying to do a million things at once this book’s plot held together better.

I like political fantasy books, and this was a political graphic novel. However, to be honest, I’m not sure how well political plotlines work in a graphic novel format. This book involved a lot of people talking- they were lushly detailed people talking, but still people talking. Which is to say, lots of inactive people. Thankfully there was some combat, but not as much as in the previous book. Honestly I enjoyed reading this book primarily because I got to see such a detailed planet in the cosmere. My final judgement depends on how the final book is pulled off. However I have to say that I like the Khriss’s sciency bits.

If you read the first book and liked it, then DEFINITELY read this. This book is an improvement in terms of storytelling from the first. This story was much slower, and while comparatively little of plot importance happened the characters had a chance to live and breathe a little. We learn more about Kenton, Kriss and Ais. After this book I actually care about them as people, which is not something I could say after the first book. I suggest you start reading the first book because it contains a lot of plot, then read this because it contains a lot of characterization.