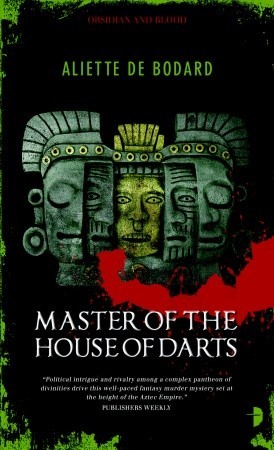 Master of the House of Darts by Aliette de Bodard

The year is Three Rabbit, and the storm is coming…

The coronation war for the new Emperor has just ended in a failure, the armies retreating with a mere forty prisoners of war – not near enough sacrifices to ensure the favor of the gods.

When one of those prisoners of war dies of a magical illness, ACATL, High Priest for the Dead, is summoned to investigate.

The triumphant conclusion of the Obsidian and Blood trilogy

Following mere months after book 2 in-book chronology, MASTER OF THE HOUSE OF DARTS is a political fantasy unlike any other.

A terrible magical disease has fallen upon Tenotchtitlan, aka ancient Mexico City. In the previous book our hero Acatl High Priest of the Dead unwillingly helped bring the new king back to life in order to save the world from being devoured by star demons. The king was crowned king and engaged in his coronation war- which failed. This terrible omen prefaced a sorcerous disease falling upon Mexico.

Acatl is called in to try to discover who summoned this terrible disease- and unfortunately there are too many suspects. However as the detective-priest uncovers layer after layer of evidence and clues, the new king (and resurrected zombie) begins to act more and more erratically. With the fate of the world hanging in the balance, with gods and terrible blood magic arrayed against him, Acatl and his apprentice Teomitl must defeat the curse and undo the sorcerer responsible for it.

The plot started strong, with Acatl trying to solve the mysterious murder, and then got stronger towards the middle as the murderous curse turned into a spreading plague. But towards the end the book the story just kinda inverted in upon it’s head and stopped being as compelling for me. To give a spoiler for what happened, it was revealed that the actions of the main characters in the previous book were what caused the curse, and that undercut a massive chunk of the plot for me.

The characters had very little development through this book. Acatl started as a faithful death priest and remained that way throughout the book. Teomitl had some more development, going from prince to king-aspirant, but that wasn’t enough for me.

The setting and feel of the book was truly unique and fantastic, which really is what draws me in to this series. Highly recommended if you want to experience an Aztec fantasy story.

Constructive criticism: the book ended on a cliffhanger. I don’t think any more books are coming in this series. So… yeah. That sucks. The plot will never truly be wrapped up.

I liked it… but you really need to start reading this series at book 1. Recommended with reservations.