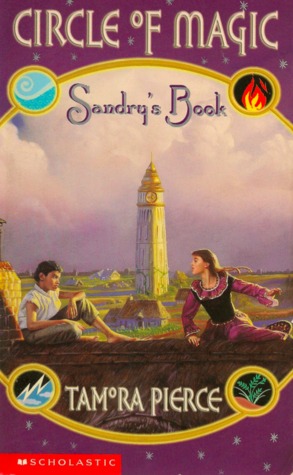 Description: With her gift of weaving silk thread and creating light, Sandry is brought to the Winding Circle community. There she meets Briar, a former thief who has a way with plants; Daja, an outcast gifted at metalcraft; and Tris, whose connection with the weather unsettles everyone, including herself. At Winding Circle, the four misfits are taught how to use their magic–and to trust each other. But then disaster strikes their new home. Can Sandry weave together four kinds of magical power and save herself, her friends, and the one place they have ever been accepted?

This is a true ensemble novel. The four main characters (Sandry, Tris, Daja and Briar) are co-equal stars in this story. The characters trade viewpoints equally, swapping from one to the next every few thousand words. It’s a short novel of only 51,000 words, so we get a good flavor of each in a short time.

Honestly going back I was surprised with how good it was. The characterization was top notch for such a short novel, the individuals are clearly defined from the moment they appeared. They each had a character arc in this novel too- a better arc than a lot of characters in adult books I’ve read.

Constructive Criticism: Head hopping. The story split the difference between 3rd Person Limited and 3rd Person Omniscient, so whenever any of the 4 main characters were in a scene together the reader was simultaneously privy to all their thoughts. It wasn’t as bad as it could have been, but honestly I would have liked it more if it were more restrained.

Highly recommended. I listened to the full cast audiobook, and it was particularly good. If you have a kid in the Middle Grade or YA book market, check this out.