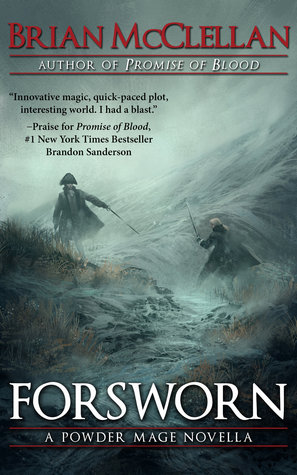 Description: Erika ja Leora is a powder mage in northern Kez, a place where that particular sorcery is punishable by death. She is only protected by her family name and her position as heir to a duchy.

When she decides to help a young commoner—a powder mage marked for death, fugitive from the law—she puts her life and family reputation at risk and sets off to deliver her new ward to the safety of Adro while playing cat and mouse with the king’s own mage hunters and their captain, Duke Nikslaus.

Occurs 35 years before the events in Promise of Blood.

The beginning of an epic tale of blood, black powder and leadership

Occuring 35 years before Promise of Blood, this novella stars Erica, Taniel’s Mother and Tamas’s wife. An as-yet-unappearing character in the series, Erica was very well drawn. She is a mixture of a ‘precocious young woman’ and ‘persecuted magic user,’ a combination which might be cliche to the nines, but McClellan really makes the combo work well.

To describe the plot, Erika is a noblewoman. One day she and her swordswoman discover a rogue Powder Mage fleeing from the police who will kill her for the crime of being born a Powder Mage. Erika (who is also a Powder Mage but is rich enough to get away with it) hides her, thus instigating the plot. This story is Erika’s coming of age tale, with her gaining independence and power in her own right.

Highly recommended. You can start the series here if you want, or read PROMISE OF BLOOD first.