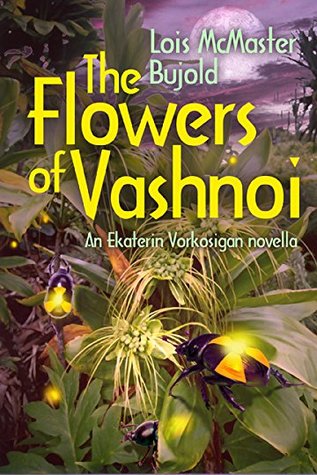 The Flowers of Vashoi by Lois McMaster Bujold

Description:Still new to her duties as Lady Vorkosigan, Ekaterin is working together with expatriate scientist Enrique Borgos on a radical scheme to recover the lands of the Vashnoi exclusion zone, lingering radioactive legacy of the Cetagandan invasion of the planet Barrayar. When Enrique’s experimental bioengineered creatures go missing, the pair discover that the zone still conceals deadly old secrets.

This novella falls after Captain Vorpatril’s Alliance in the Vorkosigan series timeline, but may be read entirely independently. The Vorkosigan saga was the recipient of the first Hugo Award for best science fiction series in 2017.

The Final Fallout of the Cetagandan Invasion Blooms

Vashnoi is the husk of the nuclear-bombed Barrayaran city, eighty years destroyed. It has returned to nature- to a certain definition of irradiated nature, that is. But Ekaterina Vorkosigan dreams that it will one day be healed of the nuclear fallout, and become a garden for the living and not the irradiated dead.

Helping her is the Escobaran scientist Enrique, and his multi-purpose genetically engineered bugs. The bugs, or more specifically the microbes in the bugs, devour radioactive plants and chelate the radioactive ions into inert forms, thereby de-radioactiving the ecosystem. With Ekaterina’s iron will and ecological know-how paired with Enrique’s lab-smarts, they’ve set up a test run in the massive 300,000 acre irradiated zone, with the sole goal of making Vashnoi livable again.

Except the glowing bugs start going missing, stolen from the test site by a pale, elfin child. Ekaterina tracks the child down, and discovers a hidden orphanage for the mutated children of Vashnoi.

I really liked this. After reading A CIVIL CAMPAIGN I was always left feeling that Bujold dropped Ekaterina, not giving her a POV in the subsequent three novels (CRYOBURN, CAPTAIN VORPATRIL’S ALLIANCE, and GENTLEMAN JOLE AND THE RED QUEEN). I always liked Ekaterina’s polite strength, so I was saddened by her lack of POV sections in those books. Having an entire novella to herself was really worth the money.

HOWEVER, this book in no way stands up on it’s own (unless you happen to like ecological sci-fi, that is). This is very clearly the last book in the Vorkosigan series, or close to it.

Highly, highly recommended if you’re a fan of the Vorkosigan Saga. If you’re not, start reading ‘Shards of Honor’ immediately- it’s one of the best SciFi books ever written.