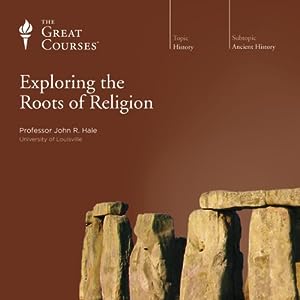 Exploring the Roots of Religion by John R. Hale

What impulse drove ancient cultures to create sites like Stonehenge, Machu Picchu, and the pyramids at Giza? Why are we so transfixed by their presence today? And what do they reveal about our ancestors-and humanity?

The dynamic force of religious belief is responsible for some of the world’s most popular and ancient locales.With these 36 riveting lectures, you can dig through the earth and learn how sacred buildings, complexes, tomb structures, artwork, and more have provided us with unparalleled knowledge about early spiritual experiences around the world. Using the tools and knowledge of their field, archaeologists can now determine the nature of a sacrificial ritual, compare the visible attributes of ancient deities, and map out the orientation of a temple or tomb.

Professor Hale gives you a comprehensive look at specific religious archaeological sites around the world-inside caves and crypts, through vast deserts and ancient cities, from Polynesia to Mexico to the American Midwest.

Studying these breathtaking sites such as Lascaux Cave, Machu Picchu, and Easter Island, you learn the points of interest that attract the attention of archaeologists and scholars, survey the principal features unearthed during the site’s excavation, discover what evidence at the site reveals about the evolution of religion, and more.

By the final lap of your international journey, you’ll have developed a new vision of religion and its crucial role in ancient history. You’ll become more attuned to spirituality’s universal elements and its unique characteristics. And you’ll realize just how much credit religion deserves for remarkable sites that continue to captivate us.

A Grand World Tour of the History of Religion

Do you want to listen to a lecture about the history of all the worlds major religions, both past and present? Including what we know about the religions of the Neanderthals and early stone age Homo Sapiens? Because this lecture’s got it.

I learned a lot from this lecture about a bunch of religions I knew very little about- including the Inca, Aztecs, Maya and the Mississippi river people. The lecturer focused less on the major world religions of today, instead focusing on historical religions such as Zoroastrianism and the fallen culture of Easter Island.

The lecturer focused more on ritualism than spiritualism, relying on the historical and archaeological record over mythology and lore. I liked this down-to-earth approach.

Was it perfect? No.

I wasn’t very impressed with the sound quality. I was always able to understand what he was talking about, but some of the lectures sounded like they were being recorded on a mashed-potato microphone.

More, as much as I liked this archaeological approach to religious study, I would have liked *some* emphasis on dogma and spirituality. That is an important part of religion, and the lecturer usually mentioned it only in passing in favor of discussing the ‘magic ritual’ part of religion instead.