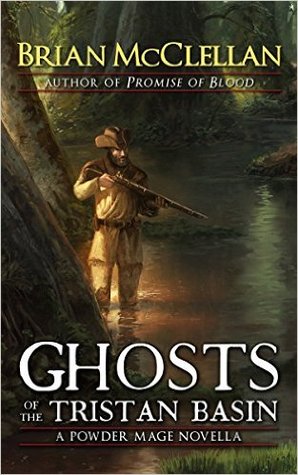 Ghosts of the Tristan Basin by Brian McClellan

Taniel Two-Shot is a powder mage with the Tristan Ghost Irregulars, a band of volunteers who have made a name for themselves fighting in the Fatrastan Revolution. They range through the swamps of the frontier, cutting off enemy supplies and raiding towns while Taniel hunts the Privileged sorcerers that make the Kez armies so powerful.

When a desperate call for help comes from the nearby city of Planth, the Irregulars aren’t the only ones to answer and Taniel must deal with another hero of the revolution: Mad Colonel Styke. But not all is well within the young Fatrastan government, and more hangs on the defense of Planth than Taniel and his companions could possibly know.

Occurs eight months before the events of Promise of Blood.

A short review for a short(ish) story.

This book features Taniel Two-Shot and Ka-Poel from the first series and Mad Colonel Ben Styke from the Sins of Empire series. Here those two characters firmly establish their legendary status, by doing the seemingly impossible of thing of stopping a massive invading Kez army with only a handful of troops, while under bombardment of heavy artillery while their enemy has massive magical advantages.