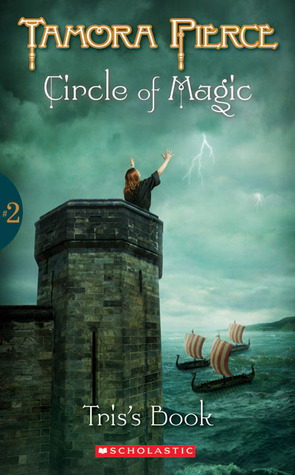 Earthquake damage leaves Winding Circle vulnerable to pirate attack, so everyone – including the young mages-in-training Tris, Briar, Daja, and Sandry – is working to strengthen the community’s defenses. When Tris’s cousin Aymery comes to visit, he advises the “weather witch” to return to the family that exiled her, but she doesn’t wish to leave her friends to face the threat without her.

As the onslaught begins, two things become terribly clear: The pirates have a powerful new weapon, and they have an accomplice within Winding Circle. But the attackers have failed to reckon with the fury of a young mage betrayed once too often and her very stubborn, very loyal friends….

… and then pirates invade

This is a re-read for me, part of my desire to refresh myself on some of the books I read in my youth. I have to say that this book walks the line between Middle Grade and YA- I don’t think this is targeted to the 17-18 year old age group.

The plot was trying to fight back against a pirate siege. I liked it because I haven’t read a similar book before. If I were to complain about one thing, it is the fact that the 4 kids do basically everything to kick out the pirates… which stretches my disbelief quite far. The kids spot the pirates, they repair the defenses, they set up plant barricades, they blow up incoming artillery, they force back in incursion into the walls, they discover the traitor, they get angry and destroy the enemy fleet. Not one adult did any of the key steps to help, only four preteens contributed. Honestly it stretched my disbelief quite far. I would have liked if the adult characters were seen to be more effective.

That said, I liked the adult characters. Rosethorn is always a hoot to read about, and Frostpine and Lark also have fun dialog. One of my favorite things about this as a YA series is that the adults aren’t awful- they don’t instantly dismiss everything the protagonists have to say. That said, the adult characters were a bit useless. The over-competence of the kids made several thousand adult magic users look like they weren’t able to pull their own weight.

The pacing was very quick… but it’s a short book. I listened to the audiobook in only about three hours. No complaints because I finished it off in an afternoon.

When I was a kid this was one of my favorite books in the series, but I have to say that I don’t this book holds up as much as some of the other ones. As I’m an adult now and empathize with the adults more and more, the trope of the ‘awful adult’ and the ‘useless adult’ have started to stick in my craw more than they did back in the day.

Recommended to be read as part of the series as a whole.