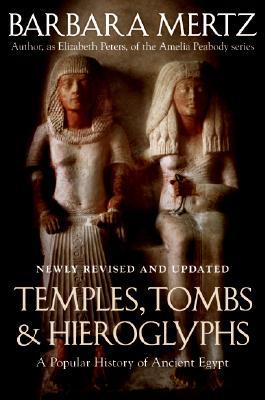 Writing as Elizabeth Peters, world-renowned Egyptologist Barbara Mertz is the author of the phenomenally popular New York Times bestselling mystery series featuring archaeologist Amelia Peabody. In Temples, Tombs, and Hieroglyphs, Dr. Mertz explores the breathtaking reality behind her fiction by casting a dazzling light on a remarkable civilization that, even after thousands of years, still stirs the human imagination and inspires awe with its marvelous mysteries and amazing accomplishments.

A fascinating chronicle of an extraordinary epoch—from the first Stone Age settlements through the reign of Cleopatra and the Roman invasions—Temples, Tombs, and Hieroglyphs brings ancient Egypt to life as never before. Lavishly illustrated with pictures, maps, photographs, and charts, it offers tantalizing glimpses into Egyptian society and everyday life; amazing stories of the pharaohs and the rise and fall of great dynasties; religion and culture; folklore and fairy tales; stories of the explorers, scientists, and unmitigated scoundrels who sought to unravel or exploit the ageless mysteries; and breathtaking insights into the magnificent architectural wonders that rose up from the desert sands.

Revised and updated to include the results of the most recent historical research and archaeological finds, Dr. Mertz’s book is unhampered by stuffy prose and dry academic formality. Instead, it is a vibrant, colorful, and fun excursion for anyone who’s ever fantasized about exploring the Valley of the Kings, viewing up close the treasures of the temple of Queen Hatshepsut, or sailing down the Nile on Cleopatra’s royal barge.

The Beginnings of Civilization

As it turns out, Egyptian civilization was around for a really, really, really, really long time. The book starts in 5263BC, and wraps up a few hundred years AD, around when Coptic Christians started destroying the temples and idols of ancient Egypt. This book is a beginner’s introduction to the vast swaths of Egypt’s entire history.

Written in a very readable (and at times funny) style by the woman who wrote the Amelia Peabody mysteries, this book of Egyptology walks the line between talking about Egyptian history, Egyptian archaeology and the study of the Egyptologists themselves.

This book talks about 30+different Egyptian dynasties which occurred over five different millennia. It informs us about the temples and tombs left behind by the Egyptians, and our patchwork of information we’ve discovered in the last two hundred years studying the ruins of this greatest of civilizations.

If I’m going to provide constructive criticism, it’s this: the author goes skin deep in some places, but goes into depth in other places seemingly at random. She chooses the ‘Great Men (and Women) of Egyptian history’ and talks about them in depth, while ignoring entire centuries if not millennia of Egyptian history. We spend chapters with Hatsheput and Thutmose III, Khufu and Akhenaten… but for some reason the author barely mentions the entire 300 year Ptolemaic Dynasty which oversaw the fall of Egyptian Civilization (you know, Cleopatra? Marc Antony? Alexander the Great and his Egyptian Lighthouse?!). This was a big oversight.

Highly recommended. The book, though long and at times dry, was funny and always entertaining.