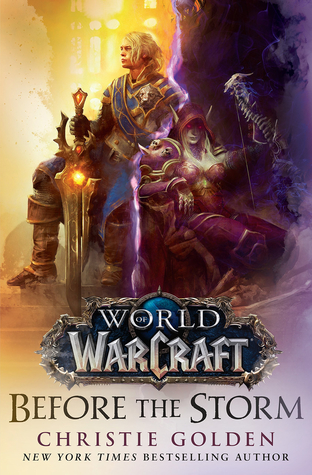 Before the Storm of the Battle for Azeroth

This is the pre-Battle for Azeroth novel. I’ve been holding off on reading it until the game’s out to make my review more current.

Plot: The major plot was a reconciliation between the living and undead people of the Kingdom Lordaeron (the living people are part of the faction known as the ‘Alliance’ while the undead are part of the faction called the ‘Horde’). This reconciliation had the potential of triggering wide-scale peace between these two factions, making it very important. This was a very engrossing plotline to read about, and not just because I’m invested into this setting. I would like to see a similar plotline in another book written in an entirely different setting.

The minor plot was about the discovery of a magical gemstone called ‘Azerite,’ which to explain it shortly is basically magical uranium (or perhaps unobtainium, or McGuffinium). This plotline had the potential of being super interesting, however I felt that it petered out.

Characterization: Three supporting OC characters in this book were fantastic.

I liked Velsinda the undead lady, because she seemed like a kindly zombie grandma who has gotten in slightly over her head by getting into Horde politics. She clearly means so well, but her blindspot involving her love for Sylvanas is just so glaring that it makes for a fantastic character flaw.

I loved Grizzek Fizzwrench the goblin and Sapphronetta Flivvers the gnome. They are two engineers who loved one another, got married, fell out of love, got a divorce, and are now estranged. In this book Sylvanas kidnaps them to make them weaponize Azerite (aka magic uranium) for the Horde. This estranged couple are consequently forced to get along with one another in order to escape custody, making for a sorta dire Rom-Com situation. They were a joy to read whenever they pop up (and the narrator really did an authentic goblin accent so that added a lot to these parts).

I wish that the Grizzek and Sapphronetta romance/hatemance plotline was the main plotline, because their dynamic was just fantastic. I liked the Undead/Human plotline, don’t get me wrong, but the characters involved in that plotline were all a bit dull.

Now about the main POVS. I know it’s hard to write Franchise Fiction characters because of ‘too many cooks’ syndrome, but frankly Anduin is super-boring to read about. He’s just nice. That’s his entire character profile. Nice. I hope that the writers/creative directors choose to take him in a new direction soon because nice is really dull. His main character flaw is being too trusting… which is super Gary Stuish. They don’t need to make him angsty! Just give him other character traits, like recklessness or something. (Yes, I know it’s a cliche saying that Anduin is a limp rag. But it’s still true.)

Sylvanas’ POV points are better given how unrepentantly self-absorbed she is. Now I want to be clear, she’s not evil in this book. She’s so emotionally damaged by her cursed existence that she can only imagine that all other people (undead and otherwise) are as equally emotionally damaged as her. A fact which is certainly not the case. This dichotomy between how she thinks the world is and how the world actually is is what makes her a good villain-protagonist. I think she could use a few more ‘I have a softer side’ moments, but by and large her POV works.

Pacing: by and large pretty good. No super slow parts.

Prose: very readable. I especially like the Azerite with Gezzrik and Sapphronetta parts because of the weird language they use.

And what are they going to do about that giant sword…?