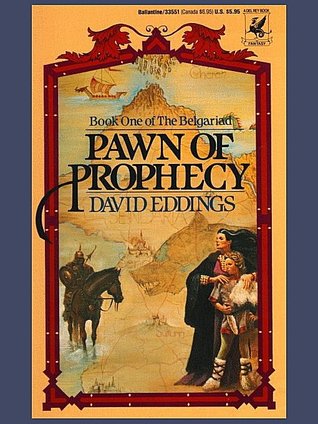 Pawn of Prophecy by David Eddings

Thanks to my sister Tessa for prompting me to read this.

A quintessential Quest Fantasy in the vein of Wheel of Time or Shannara, I’ve never read anything in this series before. PAWN OF PROPHESY was a fun dose of characterization and dialog in a compact package.

Characterization: Strong. From page one Garion was an intelligent, fully fledged character with agency. These are traits which are relatively rare in YA Quest Protagonists in my experience.

The story’s dialog was at points quite enjoyable. Pol, Mr. Wolf and Silk all have enjoyable dialog to read, which further enhances their characterization.

Plot: Okay, here we go. The plot wasn’t so hot. This was quite possibly the most generic Quest Fantasy I’ve ever read. If you delete the worldbuilding and character names, this story’s plot could be from any one of a hundred Quest Fantasy stories. For example, it’s plot of ‘retrieve the stolen magical artifact’ was almost identical to that of THE GREAT HUNT.

This story wasn’t very memorable for me. After reading this I have trouble remembering the events of this book. I think part of my problem was that the characters never really do anything. To summarize, the good guys go from place to place, talking to nobles and scamming their way through checkpoints and borders, trying to avoid capture by the nebulous bad guys. In general I don’t like McGuffin plots, and this is the nadir of McGuffins.

Pacing: It had a fairly slow start, and I was never really enthralled. A big problem for me was the fact that there was very little (if any at all) combat/violence/fighting (combat/violence/fighting being a hallmark of the Quest Fantasy subgenre). Because the POV was underage he was never really allowed to fight, which really toned down the story’s tension. Tension is important in a story’s pacing because it keeps the reader interested.

Instead this story involved the characters travelling around, keeping secrets from the protagonist and talking to important people. Because the ‘mysterious Gandalf-like elders’ kept secrets from Garion, I was left feeling frustrated because Garion is my window on the plot and I don’t like having an occluded window.

Finally, PAWN uses a lot of outmoded storytelling conventions. I won’t hate on it too much, because these were a standard convention at the time this was written, thus making this book ‘normal for it’s time’. However I am a modern reader and I don’t like this sort of thing ‘right now’. (Examples of tropes: the book starts with a HUGE infodump, stars a farmboy protagonist, there’s not one but 2 Gandalf analogs, there’s a vaguely suspicious Aragorn like figure who we’re not quite sure we can trust, there’s an upper class rogue who is too cunning to be trusted…) Similarly I didn’t really like the fact that Eddings portrayed an entire race of humans as being evil. Again, as a modern reader this is a bit icky.

PAWN is a quintessential Mid-to-Late 20th Century Multi-volume Epic Fantasy. It contains good to great characterization and dialog, but uses a lot of old fashioned tropes, very little plot and very little tension. I would love to read more from this author… if he didn’t play his tropes so straight.

Recommended for YA audiences in the 12-15 age range. Recommended with Reservations for a modern Fantasy reading adult.