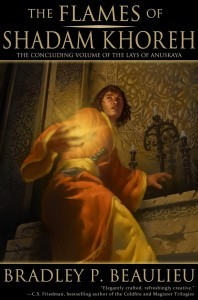 Fate is in Nasim’s hands. Will he choose wisely?

This is the epic conclusion of the Lays of Anuskaya trilogy. This review will be a combo platter, a review of both the trilogy in general and this book in specific.

Where to begin? How about the setting. We have a Napoleonic-ish Russian-ish archipelago setting, where the Anuskayan (aka Aristocractic Tzarist Russian) nobility use guns and psychic magic to rule with an iron fist. They crush the Araman (think Ottoman Turks or Kurds) resistance in order to maintain their rule of their islands. The Araman don’t like being oppressed, so they set up a religion/terrorist group which uses elemental spirits to cause wanton chaos. In the mean time there are flying sailing ships (that’s right, flying ships *with sails*). Here’s some art.

Of the three books, I think book 1 THE WINDS OF KHALAKOVO takes the cake in terms of being a lived in, breathing setting. We have conflicted characters and morally dubious factions fighting against one another. With morally grey characters all around, it’s easy to understand and sympathize with the bad guys, and at times hope they’ll win.

The plot of the first book is a classic terrorist rebellion, except with the terrorists are using a super-powerful magic kid in an attempt to destroy the Anuskayan nobility. I liked it because of it’s dubious characters (as mentioned above). In book two, THE STRAIGHTS OF GALAHESH, and book three THE FLAMES OF SHADAM KHOREH, the plot revolves around the magical blue rock called the McGuffin which can be used to destroy the world, but there is also a minor political trickery plotline tacked on. I think ‘the McGuffin will end the world if it falls into the wrong hands’ plotlines are overplayed at the present moment so I would have liked if the author focused more on the trickery.

Now, that said, I did like the set up of the magical McGuffin storyline. The bad guys don’t *actually* want to destroy the world using the magic rock, but want to cause Endarak-Iram. Endarak-Iram is basically causing Mandatory Universal Enlightenment for the Human Race by fusing heaven and earth using the McGuffin… and in the process killing everyone and everything. This motivation makes the bad guys seem, you know, almost but not really reasonable because they want to enlighten people and enlightenment is good. This is opposed to characters like Voldemort or Sauron who are evil because evil feels good(aka not compelling).

Beaulieu writes good characters. Nikander in the first book is the selfish dying son of a Duke who’s struggling to find a cure for a wasting disease which is effecting him, but he eventually transforms into a self-sacrificing warrior wizard who is willing to do anything to stop the end of the world. Nasim transforms from a semi-autistic orphan into a demigod who feels extreme angst over what he did in his past life. Atiana transforms from a submissive(ish) daughter of a noble family to a badass psychic sorcereress who kicks psychic ass and takes psychic names.

The pacing of book 3 was pretty good throughout. I think it’s a little slow from 20% mark to the 35% mark, but honestly that’s not that bad. The pacing of the books over all was similarly average: some bad, some good. I think the author could have used tighter prose and sped up events a bit in all three books.

The trilogy as a whole is Recommended if you want to read good books. This isn’t as good as the ‘Song of the Shattered Sands’ series, Beaulieu’s later series, but it’s still very good. This series (and author) is seriously under-read and under-talked about. The audiobooks in particular are good.

WINDS OF KHALAKOVO is Highly Recommended. I suggest you read it, and if you like it you can read on in the series. WINDS is the strongest in a stand-alone sense of this series, and sorta has a ‘A Game of Thrones’ vibe going on if you like that. If you like WINDS, I encourage you to read STRAIGHTS and FLAMES.