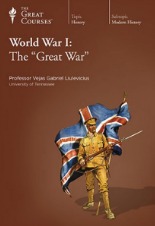 The Reading Company Audio Edition, narrated by the Vejas Liulevicius

I am reviewing the first part of this lecture series now while it’s still fresh. I will return to update this review when I track down the other parts of this lecture.

This is a good beginner’s introduction to World War 1. The lecturer narrates clearly and distinctly on a variety of WWI subjects, such as life in the trenches and the individual major battles. He doesn’t dip into any major detail about any one subject in particular, instead summarizing different subjects about WWI in 30min lectures. If you are looking for a broad introduction to one of the four worst years in human history, here is a good place to start.

In part 1, I particularly enjoyed his descriptions of trench life because he has provided information which I haven’t had up until now.

Okay, I tracked down the second half of this lecture series and I can safely say that this lecture series is an excellent summary of not only WWI but also it’s immediate aftermath. This is the first second-hand source I have found that discusses the results of WWI in depth, discussing for example the rise of Fascism in Italy, the ‘Stab in the back’ conspiracy which proto-Nazi’s used as an excuse to blame Germany’s WWI loss on the Jews, and also the poetic qualities of the European poppy.

I highly recommend this lecture series.

Audiobook notes: Liulevicius did a good job enunciating and explaining the complex problems causeing and caused by WW1.