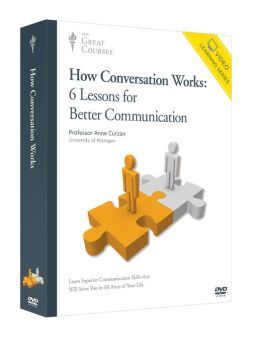 How Conversation Works By Anne Curzan

Lecture edition by the Teaching Company

A down and dirty guide to improving your speaking game.

I’ve started going through my library of unread books and audiobooks, and I found this lodged in the nether-realms of my computer’s hard drives. It sounded interesting and was decently short (only about 4 hours long) so I fired it up.

The lecturer gives solid advice, such as when to employ a non-sequiter to diffuse a conversation which is heading in a poor direction and advice on how to elicit conversation from elsewise laconic individuals (namely by giving many topics of conversation to talk about when you have the speaking stick).

I was an English speaker before this, so most of what she had to say was already known to me. The lecturer made it clear that her advice was mainly for English speakers only, as some of it could be interpreted as rude in other languages. What this did do for me was make me self-aware of some of the trips and tricks I was already using.

I’d recommend you check this out if you are slightly interested.