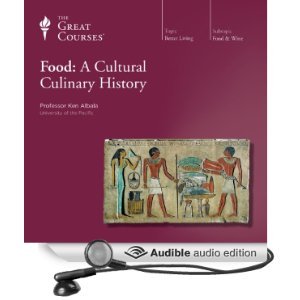 Description: Eating is an indispensable human activity. As a result, whether we realize it or not, the drive to obtain food has been a major catalyst across all of history, from prehistoric times to the present. Epicure Jean-Anthelme Brillat-Savarin said it best: “Gastronomy governs the whole life of man.”
In fact, civilization itself began in the quest for food. Humanity’s transition to agriculture was not only the greatest social revolution in history, but it directly produced the structures and institutions we call “civilization.”

From Hunter Gatherers to Monoculture and beyond: a History of the Human Diet.

Humans have been eating food since before we were humans. It doesn’t matter where you’re from or who your ancestors are, you eat food. Part of the Great Courses series by the Teaching Company, Ken Albala shows us how our diet of today is a reflection of different parts of the world and how the world has changed with time.

The lecturer spent time cooking recipes, explaining biology, describing history and showing culture. Sometimes I felt he didn’t spend enough time cooking recipes, or more time discussing the effect of important historical events on the international diet, but overall he did a good job of covering important events. Most importantly he covered the traditional diets of people from all over the world- from Africa to Japan to Meso-America.

He also showed how European Colonialism of the last few centuries has blended the world’s diets, integrating the everyday diets of people around the world so that people in Europe now use potatoes, people in India now use chilies, and people in Japan now make Portuguese style cakes. I would have liked if he spent more time discussing how non-rich people ate (aka peasant/slave diets) but as it was the author did a great job expressing human history.

Highly recommended. I do have a few qualms. The first is that he did not cover Norman Borlaug’s Green Revolution which fed billions of people, and earned him a Nobel Peace Prize. The second qualm is that Ken got a few details about genetic engineering crops wrong, and I disagreed with his thesis on the subject.