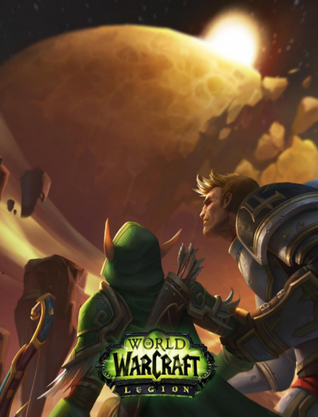 A Thousand Years of War: The Story of Alleria and Turalyon By Robert Brooks

Description: PART ONE: TWO BRIGHT LIGHTS
Ranger-Captain Alleria Windrunner and High General Turalyon’s disappearance was not the end of their last war, but rather the beginning of a new and more terrible one.

PART TWO: THE EMERALD STAR
After joining the Army of the Light, Alleria and Turalyon’s war against the Burning Legion took them all the way to the seat of the demons’ power: Argus.

PART THREE: SHADOW AND LIGHT
The Burning Legion is attacking Azeroth. The Army of the Light is on the verge of defeat. Alleria and Turalyon are on opposite sides of the cosmos, desperately searching for the key to ending Sargeras’s crusade.

A Thousand Years in Lore: A History of World of Warcraft

This short story was published on Youtube by Blizzard Entertainment. Telling the untold story of what happened to the characters of Alleria and Turalyon during the events of the Second War and World of Warcraft: Legion. If you’re playing WoW: Legion spend an hour or two to listen to this three-part series.

Part one of this series occurs after the end of Warcraft 2: Beyond the Dark Portal, telling the story of how Alleria and Turalyon joined the Army of Light. Part two occurs some decades/centuries later when Alleria and Turalyon are raiding a Legion building on Argus. Part three occurs just prior to the events of WoW: Legion, when the Legion attacks the Xenedar.

The sound quality of this novel is top-shelf, using sound effects and music. This is a full-cast audio production, with different actors for all the different characters. Highly recommended for people who enjoy the games.