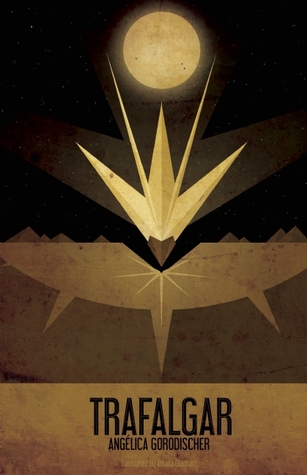 Description: Don’t rush Trafalgar Medrano when he starts telling you about his latest intergalactic sales trip. He likes to stretch things out over precisely seven coffees. No one knows whether he actu-ally travels to the stars, but he tells the best tall tales in the city, so why doubt him? Trafalgar is Angélica Gorodischer’s second novel to be translated into English. Her first, Kalpa Imperial, was selected for the New York Times summer reading list.

Angélica Gorodischer lives in Rosario, Argentina. She has received many awards, most recently the World Fantasy Lifetime Achievement Award.

Trafalgar’s Adventures in SPAAACE! And coffee. Lots of coffee.

Do you have a friend who has the most exciting job ever? Well Trafalgar Medrano is that friend for the POV of this novel. Trafalgar is an interstellar adventurer, a seller of comic books and light bulbs. He gallivants around the universe, buying silver bells on one planet and selling them on another. Between mercantilist jobs he returns home to Argentina where he gossips with his friends in a coffee shop.

I tracked this down at my local library because I am a huge fan of KALPA IMPERIAL by the same author, and this book did not disappoint. The writing style is delightfully non-traditional by my American standards. I’m not sure if that peculiarity is due to stylistic choices chosen by the translator or by choice of the author instead. Written originally in Spanish, I found the translation to be very well done.

Highly recommended if you want to read a book about lotus-eating order sycophants, a guilt-tripping zombie apocalypse and a man from modern day Argentina visiting 15th century Spain (and nearly getting killed by the Spanish Inquisition).