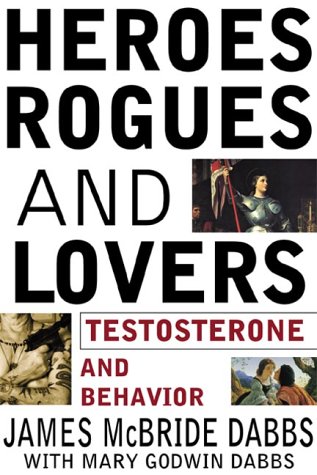 Description: Since the early 1970s, when studies of testosterone first gained wide public attention, this principal male sex hormone has taken the rap for a range of characteristics or behaviors, including low intelligence, rape, and road rage. The truth is both remarkably more complex and more interesting scientifically. From prehistory to the present, testosterone has played a significant role in the development of human society as well as in romantic, marital, and parental relationships. It affects women as well as men in such areas as language ability, cognition, and spatial orientation.

Interweaving intimate case histories with first hand scientific research, “Heroes, Rogues and Lovers engagingly explains the animal within us all, revealing testosterone’s function in human evolution and its role in surprising links between animal and human behaviors.

A study of the battle of nature versus nurture.

This is a semi-scientific, semi-correlation write-up about the hormone known as testosterone. Written more than fifteen years ago, the information contained within is a little bit out of date. I’m going to be more blunt than usual and admit this wasn’t my favorite book ever. The authors took a usually-negative perspective of how testosterone and men exist in modern day society, devoting only once chapter to the ‘heroes’ created by testosterone at the very end of the book (and even then they listed all the drawbacks such heroes often live with.

If you want to learn about how testosterone’s role in modern (and premodern) society, here’s a good place to start. Written in simple terms which a non-scientific layman could understand, the authors approached the subject with authority. They used quite a few anecdotes to underlie the points they were trying to drive home.

If you do have a scientific background like me, though, I found the anecdotes to be distracting from the main thesis of the work. Indeed the overuse of anecdote made me distrust the main arguments slightly.

As the authors of the book at one point pointed out themselves, the book painted naturally high-testosterone men (and women too) in a somewhat negative light. By pointing out that high-testosterone children are more likely to be troublemakers when young and lawbreakers when older, they showed the inborn disadvantage so many of us have to live with and struggle against. I am happy I read it if only because the authors firmly rejected the ‘nurture’ part of ‘nature and nurture’ in order to show a less popular viewpoint of society as a whole.

Recommended with reservations. If you’re interested, give it a look.