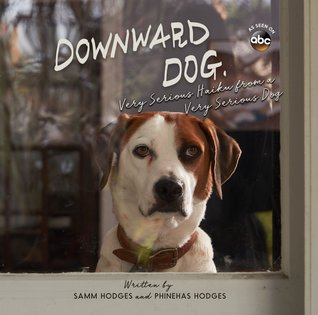 Description: A book of haiku and illustrations from the mind of Martin, the talking, angst-ridden, introspective dog from the ABC TV series, Downward Dog.

Sam Hodges is part of the writing and creative team of the ABC TV sitcom Downward Dog and he provides the distinct voice for Martin on the show. Hodges is also an accomplished director, having won numerous awards for his commercial work for Animal Inc.

Phinheas Hodges is part of the writing staff on the ABC TV sitcom Downward Dog. He is also a freelance writer, director, and editor.

Idil Gozde is an award-winning animator and graphic designer at Animal Inc. Her book trailer for the company’s Nobody’s Girlbook won two awards at the 2015 Addy Awards in Pittsburgh.

Heartbreak and redemption, one syllable at a time.

Martin the dog is a middleclass American pooch. His main worries are the daily disappearance of his owners and monotonous kibble. He hunts cats and squirrels, he rips apart shoes and watches Big Bird on TV.

But Martin is getting old. His muzzle is turning grey and he sits on the sidelines while his owners play with younger dogs.

This is a heartbreaking and heartwarming book. Highly recommended if you are a dog owner.