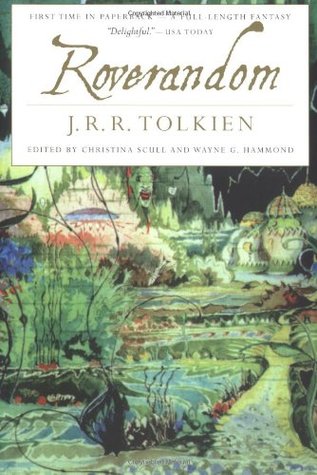 Description: In 1925, four-year-old Michael Tolkien lost his beloved toy dog on the beach. To console him, his father, J.R.R. Tolkien, improvised a story about Rover, a real dog who is magically transformed into a toy and is forced to seek out the wizard who wronged him in order to be returned to normal. This charming tale, peopled by a sand-sorcerer and a terrible dragon, by the king of the sea and the Man-in-the-Moon, endured several drafts over the years. Now, more than seventy years later, the adventures of Rover are published for the first time. Rich in wit and wordplay, Roverandom is edited and introduced by Christina Scull and Wayne G. Hammond and illustrated with Tolkien’s own delightful drawings.

A dog’s adventures to the moon, the bottom of the ocean and to the land of dreams

This is a 100page long children’s book written by JRR Tolkien. Aimed at the 6-8 year old age group, it is a cheerful tale of a dog who crosses one wizard and must suffer the consequences therein.

It was a fun story.