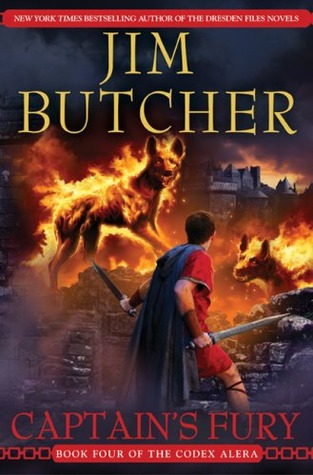 Description: After two years of bitter conflict with the hordes of invading Canim, Tavi of Calderon, now Captain of the First Aleran Legion, realizes that a peril far greater than the Canim exists-the mysterious threat that drove the savage Canim to flee their homeland. Now, Tavi must find a way to overcome the centuries-old animosities between Aleran and Cane if an alliance is to be forged against their mutual enemy. And he must lead his legion in defiance of the law, against friend and foe–or no one will have a chance of survival . . .

War has come to Pokemon Rome.

This is the fourth book in this series, after ‘Furies of Calderon,’ ‘Academ’s Fury,’ and ‘Cursor’s Fury.’ Read those before you read this.

This is my least favorite book in this series, so I’m starting with constructive criticism. Butcher is an author who writes excellent combat- but there can be too much of a good thing. It seemed to me like 2/3s of this book was fighting or action, and frankly that came at a cost in terms of characterization and plot. And to be blunt, a lot of that fighting was boring.

Characterization: Tavi undergoes a little character growth, but not as much as I’d expect from him learning he’s the secret prince of Pokemon Rome. The other three POV characters, Fidelias, Issana and Amara were better.

Fidelias undergoes a heel-face turn and betrays the baddies to become a goodie.

Issana deals with some parenting angst, which is something I’ve not seen before in fantasy and therefore liked.

Amara loses faith in her employer.

Plot: One quarter of the book, the part starring Amara, was boring. Basically she went on one long nature hike over the course of about 100 pages. Yes, there were events during the hike, but it was boring nonetheless.

The Fidelias plot, which includes the fight against the Canim, was the best part of the book because it involves everything from politics to battlefield warfare to treachery.

The Issanna/Tavi plot was okay. Not bad like the Amara plot, but certainly nothing to write home about. My biggest qualm about it is that it basically retreads plot points from ‘Academ’s Fury.’ Net total, this book barely moves the plot-dial from the last book.

My final criticism is that I find the canim to be boring. All of them are fierce, warlike dog-men with no discernible different personality between one canim and another. More, their social mores (aka you gotta act like tough wolves) are just stupid. Why do the humans have to submit to canim mores? Why can’t the canim submit to human mores? Similarly the human bad guys kinda suck, but this is a well known Butcher flaw so… yeah.

Here’s a couple positive things to this book to balance out my rant.

I liked the leviathans. They are titanic turtles which destroy ships, and are thus cool.

The enemy mercenaries which pursued Tavi held a lot of promise, and that promise paid off for the most part. I liked the climax where Tavi fought a mercenary, because the merc was built up to be really special.

I find the magic in this series fascinating- indeed I wish that we saw more about Tavi’s training now that he has magic.