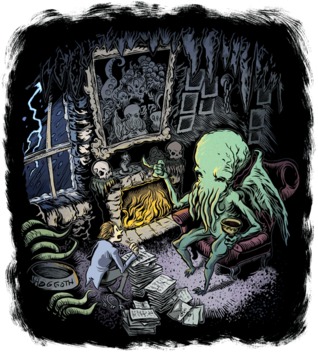 Cthulhu narrates a short story by Neil Gaiman. Talking about his origins in a rather personable style, Cthulhu comes off as a friendly pet owner in his conversations with Whateley the chronicler. We learn about Cthulhu’s birth under the bleeding moon, his wild and crazy younger years with the Yog-Sothoth and Hastur. After a brief interlude we discovered that Cthulhu has two deal with encroaching elder gods you want nothing more than to steal his oceans. The wars between elder gods resulted in a barbecue of all the dinosaurs. After a further interlude we learned that Cthulhu has had his head cut off and is now narrating the story from the bottom of the ocean.

In total, this is a rather weird story. If you’re a Lovecraftian aficionado to the nth degree, this short story might seem a little insulting. But for me, a person who knows virtually nothing about the Lovecraftian mythos, this book is fun, using characters I vaguely know in a manner I find intriguing. I might use this as a launching pad to get more interested in the Lovecraft mythos.