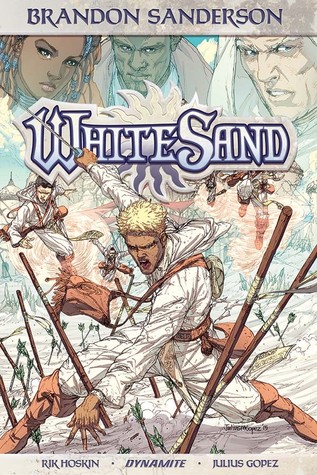 Description: A brand new saga of magic and adventure by #1 New York Times best-selling author Brandon Sanderson.
On the planet of Taldain, the legendary Sand Masters harness arcane powers to manipulate sand in spectacular ways. But when they are slaughtered in a sinister conspiracy, the weakest of their number, Kenton, believes himself to be the only survivor. With enemies closing in on all sides, Kenton forges an unlikely partnership with Khriss — a mysterious Darksider who hides secrets of her own.
White Sand brings to life a crucial, unpublished part of Brandon Sanderson s sprawling Cosmere universe. The story has been adapted by Rik Hoskin (Mercy Thompson), with art by Julius Gopez and colors by Ross Campbell. Employing powerful imagery and Sanderson s celebrated approach to magical systems, White Sand is a spectacular new saga for lovers of fantasy and adventure.”

Sand: The Adventures of SandMan in the Realm of Sand, using the Magic of Sand to defeat SandEnemies.

I’ll start with my constructive criticism.

Coming off the high of Oathbringer, White Sand is comparatively mediocre. A graphic novel, White Sand is part of Sanderson’s Cosmere books so I can’t help but compare it to other Cosmere novels. Now I’ll be the first to admit that graphic novels aren’t really my forte: I’ve read less than a handful in my entire life. That said, reading this novel I was left with the impression of a movie which tried to adapt a story too literally from the book. I think the graphic novel should have been more willing to diverge from the source material. More, this book seemed pitched to a YA audience, which I am not.

Now onto what I liked.

Plot: Mixed bag. On one hand we have the story of an underdog sand wizard who is trying to prove himself to his father- only to fail when his father dies. Sand wizard dude then muddles around unclearly for the rest of the book, without real stated goals. Khriss has a far more interesting plotline, as she is trying to discover what in sandland killed her fiancé. I understood and liked the stakes in her plot, but I was never invested in the stakes of sand wizard POV.

Setting: Excellent. Not only was the setting really creative, but I liked how the artists portrayed it. My one qualm is that the sandpeople’s art and coloration was too monotonous.

Pacing: Khriss’s plotline was well paced throughout. Sand wizard’s plotline was a good, ‘trying to get dad’s approval’ plotline… up until the point that dad died. After that point I felt his plotline just stumbled. Unfortunately that occurred 1/3 of the way into the graphic novel, so a lot of this book seemed aimless.

Characterization: The art style of the characters was top notch. The characters have distinct personalities. Except for Sand Wizard. Sand wizard’s name is ‘Kenton,’ a fact I just had to look up his name for this review because I forgot his name in the five minutes between reading this book and writing this review. Kenton was boring. He became generic after his father died, a blank sheet without goals or aspirations or even friends. He just existed in the plot, and things happened to him. Khriss was much better: she’s a cultured woman who traveled across the globe in order to find evidence of her dead fiance, all while doing anthropology on the barbaric daysiders.

Recommended with reservations. Read it if you like Cosmere books OR if you like graphic novels and are Cosmerecurious.