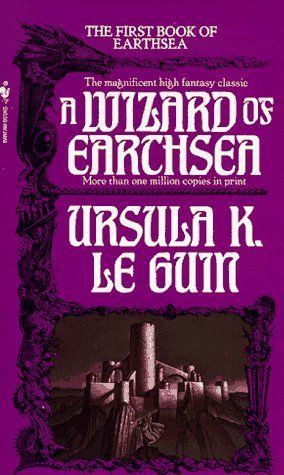 A Wizard of Earthsea By Urzula K. Le Guin

Ged was the greatest sorcerer in all Earthsea, but once he was called Sparrowhawk, a reckless youth, hungry for power and knowledge, who tampered with long-held secrets and loosed a terrible shadow upon the world. This is the tale of his testing, how he mastered the mighty words of power, tamed an ancient dragon, and crossed death’s threshold to restore the balance.

This is my third re-read of this book, the last two times more than a decade ago. This was one of the first fantasy books Ive ever read. I chose to re-read this in honor of the recent passage of the author, Ursula LeGuin. She is missed.

This is probably the best farmboy-to-badass story I’ve ever read. This story succulently transforms the main character from a marginal nobody on an unimportant island into one of the most important wizards who ever lived. Duny’s transformation into Ged/Sparrowhawk was a vivid, character-based story. We the readers got to witness how his failures repeatedly nearly cost him his own life, and occasionally the lives of other people. He is transformed by these traumatic occasions, and must return to his roots to overcome his hubris.

The plot of this story is entirely character-focused. We follow Duny/Ged/Sparrowhawk’s changes as he struggles against his impatience, then his jealousy then finally his own fear of death. This book is a touchstone of character-focused fantasy work because it’s so good at what it does. Unfortunately the actual events of the plot were more ‘villain of the week’ style storytelling, (first we fight Jasper, then we fight the dragon, then we fight the Stone, then we fight the gibbeth) which gave the book an unfocused aspect which I didn’t like. If the author focused on just one or two villains I think they would be more memorable instead of throwaways.

The pacing was less awesome. It’s stellar up until the 3/4’s mark, and then I found that the pace dropped of a cliff. At about the 3/4 mark Sparrowhawk starts hunting the gibbeth, and that involves sailing. A lot of sailing. Now I liked reading about sailing because naval settings are rare in fantasy. But there is too much of a good thing. I think ten pages of sailing could have been trimmed out of this and no one would have noticed.