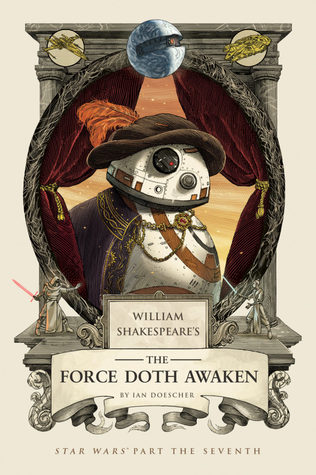 Experience The Force Awakens as a Shakespeare play, complete with Elizabethan verse, Shakespearian monologues, and theatrical stage directions! As the noble Resistance clashes with the vile First Order, Rey, Finn, Poe Damaron, Kylo Ren, and BB-8 are pulled into a galaxy-wide drama–in iambic pentameter! Star Wars fans and Shakespeare enthusiasts alike will enjoy the authentic meter, reimagined movie scenes and dialogue, and hidden Easter eggs throughout. Chewbacca speaks! Leader Snoke gives a soliloquy! And the romance of Han Solo and Leia Organa takes a tragic turn that Shakespeare would approve of. All with woodcut-style illustrations that place Star Wars characters into an Elizabethan galaxy. The story may take place in a galaxy far, far away, but you’ll be convinced it was written by the Bard.

By My Troth, Star Wars!

Disney and Lucas Arts, give whoever authorizes your franchise fiction work a bonus.

I discovered this book on the new releases shelf at my local library, and it was glorious. I had no idea this book even existed until I saw it, but from the moment that my eyes laid upon it I knew I needed this in my life.

This book is basically the novelization of Star Wars: The Force Awakens, as told by William Shakespeare. Reading this really did remind me of reading ‘The Tempest’ last year. The novel is filled with larger than life characters, from the dramatic General Hux to the conflicted Finn. And the monologs. The glorious monologs! Chewbacca, who traditionally doesn’t get much sensible dialog, is better served in this screenplay. While he speaks in his usual grunts and barks in the text of the play, in the footnotes we get the editor’s translation of what he is saying.

I loved it. For me this  verged the space between a light reading book and a heavy reading book. The subject matter was eminently fun, but presented in an ennobling format which served to only heighten the drama and tension therein. And the fact that I could recall the movie and ‘watch along’ as I read this only made it the better.

Highly recommended for any theatre nerd, Star Wars fan or anyone with even a mild interest. Check out a couple pages on Amazon to see if this is your sort of thing.