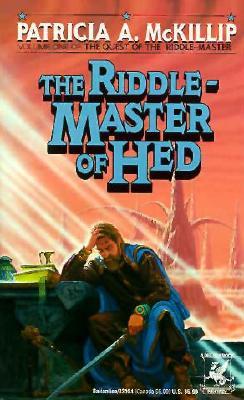 The Riddle-Master of Hed By Patricia McKillip

Long ago, the wizards had vanished from the world, and all knowledge was left hidden in riddles. Morgon, prince of the simple farmers of Hed, proved himself a master of such riddles when he staked his life to win a crown from the dead Lord of Aum. But now ancient, evil forces were threatening him. Shape changers began replacing friends until no man could be trusted. So Morgon was forced to flee to hostile kingdoms, seeking the High One who ruled from mysterious Erlenstar Mountain. Beside him went Deth, the High One’s Harper. Ahead lay strange encounters and terrifying adventures. And with him always was the greatest of unsolved riddles; the nature of the three stars on his forehead that seemed to drive him toward his ultimate destiny.

Seafoam Eyes Staring into Your Soul

Another McKillip classic, this is probably her most famous (and approachable!) book. If you want to start reading the McKillip canon, this is a fine place to start. This is a re-read for me.

Morgon, Prince of Hed, is a farmer. Hed is a boring land, not unlike the Shire in that all the interesting things happen everywhere else. Morgon, however, is not boring. He was born with three star-shaped birthmarks on his forehead. No one knows what those stars mean, not even the pseudo-magician Riddlemasters of the College of Caithnard. So when his parents discover an ancient harp with three stars upon it, they buy it intending on bringing it back to their son. However, on the boat-ride home, their boat sinks mysteriously. So begins this story.

Plot: This is a non-traditional Quest Fantasy, in that the main characters must travel not somewhere to beat the big baddies, but travel to the god-emperor who lives on Erlehnstar Mountain and ask him what is up with Morgon’s stars. The bad guys attack the good guys from the shadows, strange sea-men whose flesh is made of seaweed and sand and whom can transform into anyone. I love this book for the fact that everything takes place in a settled, peaceful empire with no random monsters to defeat. The only dangerous things are enemy armies from the rival kingdoms in the empire and the occasional threat of a shapeshifter.

Characterization: Morgon is good. He’s a classic ‘conflicted hero,’ who doesn’t want to Fulfill Destiny in order to Save the World, but he pulls it off where most such characters fail. He’s already the ruler of his sub-kingdom, so it’s only natural that he doesn’t want to leave- but the shapeshifters keep trying to kill him, forcing him to continue his journey. Deth is… ooph. Spoilers for future books.

Everyone else is… interesting. McKillip doesn’t write the most realistic of characters. Her stories are fairy-tale inspired. Consequently very few of her characters have such rich existences that we the reader get the impression that they will still grow and change (or even exist) once the lens of the story moves away from them. Her characters are more archetypes: archetypes are fun to read about, but archetypes aren’t people.

Pacing: Good. The book is short, and things constantly happen. There’s very little combat, but when it is used it has the McKillip mystique about it.

Highly recommended, if you’re in the mood for an unusual Quest Fantasy. Just be prepped to read the rest of the series afterwards!