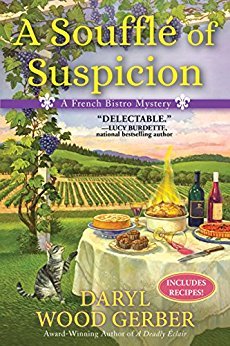 A Souffle of Suspicion by Daryl Wood Gerber

The buoyant mood at Bistro Rousseau deflates when Chef Camille’s sister, Renee, turns up dead in the chef’s kitchen, and Mimi Rousseau must tease the real killer out of a mélange of menacing characters.

Crush Week in Nouvelle Vie is a madhouse—in a good way. Tourists pour into town for the pressing of the Napa Valley’s world-renowned grapes and all the town’s businesses get a nice lift, including Bistro and Maison Rousseau. Mimi is raising the ante this year with a Sweet Treats Festival, a wonderland of croissants, cakes, tarts, and soufflés crafted with expert care by the area’s top talents.

Chef Camille’s sister Renee is managing the festival with a cast-iron fist, upsetting everyone, including her sister. Which is bad for Camille when Renee turns up dead in the chef’s kitchen. Mimi is still building her business, so her first course of action is to whip up answers and catch the unsavory perpetrator before Camille takes a dusting and gets burned.

Cupcakes with a side dish of Red Herring Lutefisk

I was given this book for free in exchange for an honest review.

This Cozy Murder Mystery is of the Culinary subgenre- meaning it focuses on a main character who cooks. Additionally there are fourteen recipes included at the end of the book. This is the second book in a series, and I haven’t read the first one. The main character struggles with some traumas which occurred in the previous book, but they weren’t so serious that I was left struggling, so as far as I’m concerned you can potentially read this series out of order.

Chef Mimi is our amateur sleuth for this sweet and savory adventure through Napa Valley. She is a cat-loving small business woman, who owns and operates a small bistro. She gets wrangled into helping with a food festival by the woman Renee. Everything is going great with the festival: the guests are donating money to charities, Mimi’s business is booming and the souffle contest is the talk of the town. At least until the constantly bickering Renee turns up extremely dead in while making a souffle.

The plot was a Christie-esque adventure which reminded me of Diane Mott Davidson’s work. The police are left clueless when presented by an overabundance of potential killers. Renee’s husband wants to take over the business. Renee and her sister have fought in the past (using chef’s cleavers!). Renee screwed over an old business partner, who potentially wants revenge. The list goes on. As the main character Mimi interviews witnesses and turns up clues, the killer targets her to prevent her from discovering the truth.

I had a good time reading this and would read more in the series. But to give an unbiased review I’ll list some constructive criticism: none of the characters particularly stuck out to me except Renee, who was killed within pages of the book’s beginning, and Mimi’s assistant who lives with her head in the clouds. I would have liked for more of the characters to have some panache.

And now for the recipe reviews.

At the end of the book are several recipes. I made the Beef Bourguignon (aka Beef Stew with extra wine) and the Brochette D’Agneau a la Grecque (aka Greek Kebabs). Both were excellent.

The Beef Bourguignon in particular was perhaps the best beef stew I’ve ever had, and definitely the best I’ve ever made. I learned the trick of thickening the broth and enriching it by combining butter with corn starch from this book.

The Brochette D’Agneau wasn’t as excellent. Don’t get me wrong, I liked it plenty- however the sauce was a little too thin and watery to be used as a proper dipping sauce. I know it was supposed to be more of a marinade, but I was using a cut of meat which didn’t need to be marinated. It still made for a great meal (we had the lamb kebabs with some falafel), but after the high-note of the Bourguignon I was hoping for more.