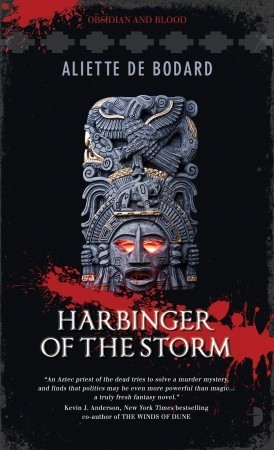 Harbinger of the Storm by Aliette De Bodard

Death, magic and intrigue in this hotly-anticipated follow-up to Servant of the Underworld. A sumptuously-detailed Aztec world, which will appeal to fans of magical fantasy, historical drama, political intrigue and murder mysteries.

THE AZTEC EMPIRE TEETERS ON THE BRINK OF EXTINCTION.
As the political infighting starts within the imperial court, Acatl, High Priest for the Dead, makes a macabre discovery in the palace: a high-ranking nobleman has been torn to pieces by an invocation – and it looks like the summoner belongs to the court itself…
Genres: Fantasy,  High Fantasy, Epic Fantasy, MesoAmerican Fantasy, Alternative History, Mystery, Noir

Tamales and Jade, or how star demons came to prowl the streets of ancient Mexico City

Book 2 in the Obsidian and Blood series, this book is thematically very similar to the previous one. Where the previous book was a mystery revolving around a plot to take over the world by unquiet gods involving a ‘whose baby is this?’ plot, Harbinger of the Storm instead is a classic serial killer mystery, where the killer is using demons to kill people.

Acatl, the High Priest of Death for Pre-Colombus Tenotchitlan, is a chronically overworked detective/embalmer/magician, who is on the bottom of the metaphorical totem pole of all of Tenotchitlan’s High Priests. When the emperor of the city is killed, leaving a mystical wound in reality,  Acatl is called in to solve the crime. He uncovers multiple conspiracies, some originating from outside of the empire and some inside, and must untangle the truth of who is responsible for allowing cosmic monsters back into reality.

I loved the first book in this series because of it’s unusual noir-ish tone- a grim mystery played fairly straight, with dark characters and political intrigue. True mysteries aren’t something which occurs very often in fantasy, so this novel was a delight to read. That said, the setting is integrally a part of the setting- if you’re put off by human sacrifice and bloodshed this is really not the book for you. The pacing was fantastic- fast paced for a quick novel.

The book’s strongest aspect is it’s setting. Set in the ancient Mexico City, Acatl is constantly eating masa tortillas and cooked salamanders, tamales and tomatoes. The book’s blood sacrifice based magic is probably the most unique magic system I’ve ever read in a book before- disturbing costs for disturbing effects.

Time for constructive criticism. While all the main characters are interesting to read about (none commit the unforgivable sin of being boring) none of them change dramatically from the beginning of the book to the end. The book was still enjoyable without it, making it similar in tone to serials such as Nero Wolf, Hercule Poirot or Sherlock Holmes where the main characters don’t change much from story to story. But this isn’t an infinitely long serial of novels, so there’s no excuse to not have character development.