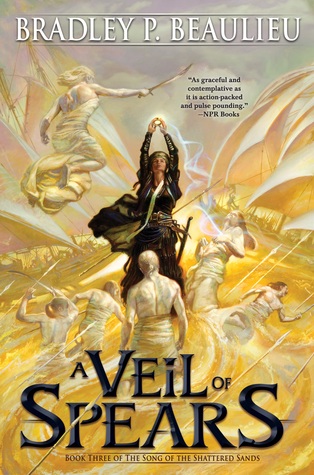 A Veil of Spears by Bradley Beaulieu

The third book in The Song of Shattered Sands series—an epic fantasy with a desert setting, filled with rich worldbuilding and pulse-pounding action.

Since the Night of Endless Swords, a bloody battle the Kings of Sharakhai narrowly won, the kings have been hounding the rebels known as the Moonless Host. Many have been forced to flee the city, including Çeda, who discovers that the King of Sloth is raising his army to challenge the other kings’ rule.

When Çeda finds the remaining members of the Moonless Host, now known as the thirteenth tribe, she sees a tenuous existence. Çeda hatches a plan to return to Sharakhai and free the asirim, the kings’ powerful, immortal slaves. The kings, however, have sent their greatest tactician, the King of Swords, to bring Çeda to justice for her crimes.

But the once-unified front of the kings is crumbling. The surviving kings vie quietly against one another, maneuvering for control over Sharakhai. Çeda hopes to use that to her advantage, but whom to trust? Any of them might betray her.

As Çeda works to lift the shackles from the asirim and save the thirteenth tribe, the kings of Sharakhai, the scheming queen of Qaimir, the ruthless blood mage, Hamzakiir, and King of Swords all prepare for a grand clash that may decide the fate of all.

Sharhakhai crumbles. With a quarter of it’s ruling kings dead, chaos bubbles up from the depths of the desert.

Beaulieu delivers again with this fantastic third-book in a six book series. A VEIL OF SPEARS further ups the ante from book two, and sets up an even more tense book 4. If book 1 focused on crime and criminals, book 2 on a Kill-Bill assassination revenge plot, then book 3 is when the story REALLY opens up. We the readers finally begin to understand the depths to which the backstory and plot. The scope broadens from it’s lowly origins, to expand to cover the machinations gods and demons.

Çeda is an action focused main character: not one for contemplating ancient mysteries, she solves her problems with swords and daring do. Instead most of the backstory’s unfolding is done by the research of Davood and Rahaad, two recurring characters from the previous two books. I really liked Rahaad and Davood in this book- their character development was excellent as they begin to realize that they’re lambs among lions. Ultimately all three are excellent characters- but the POV character I love the most was King Ysan. He’s more delightfully evil here than in even book 2.

The plot was a non-standard Political Fantasy plot- multiple factions are struggling for control of the desert city of Sharhakhai. This book develops the factions further: the Moonless host, the desert tribes, the Queen of Qiamir, the King of Secrets, the King of Kings, the King of Spears, the Thirteenth Tribe and Hamzakiir are all fighting against one another for control of the city’s wealth and magic. They form alliances and betray one another as a matter of course- in the end only one faction can come out on top. At the end of this story the Thirteenth Tribe has been firmly reestablished, and they roam the desert openly at war with Sharhakhai.

I loved this book, but it’s time for some constructive criticism. This book didn’t really expand the lore of the setting too much. For example, one of my favorite parts of book 2 was when characters sat around campfires and told folklore and fairy tales- we learn more about the setting and we the readers have some time to chill and relax between high-octane scenes. This book was much more action packed, making this a quicker read but ultimately less substantial. Beaulieu should have slowed down a bit, added a few more ‘low-octane’ scenes, and maybe flesh out the desert’s folklore and everyday life some more.