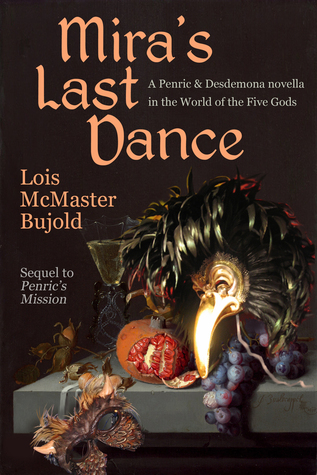 In this sequel to the novella “Penric’s Mission”, the injured Penric, a Temple sorcerer and learned divine, tries to guide the betrayed General Arisaydia and his widowed sister Nikys across the last hundred miles of hostile Cedonia to safety in the Duchy of Orbas. In the town of Sosie the fugitive party encounters unexpected delays, and even more unexpected opportunities and hazards, as the courtesan Mira of Adria, one of the ten dead women whose imprints make up the personality of the chaos demon Desdemona, comes to the fore with her own special expertise.

Fourth novella in the “Penric and Desdemona” series.

Desdemona Gets to have some Fun

I was given this book for free for the purpose of an unbiased review.

This is the forth book written in the Penric series, but is chronologically the fifth book in the series.  I have read the first three books in this series chronologically, but not the book just prior to this one. I’ll be honest, I was a bit confused. Mira’s Last Dance follows closely on the footsteps of ‘Penric’s Mission,’ so you should read this only after reading that (and the first four books in the series while you’re at it).

Penric and Desdemona are on a secret diplomatic mission far away from the Ibran Peninsula on behalf of the Bastard. And by diplomatic mission I mean they are spies using their magic powers to escape pursuit and save the woman Nikys from the cops. They are trapped alone in a foreign land with no friends and no access to the temples of the gods which usually help priest Penric.

Ordinarily this situation wouldn’t be to much trouble- after all, Desdemona is a magic-wielding demon in a low-magic world. (Desdemona is a personality-devouring demon who copies the personalities of her hosts and adds them to her own personality). However on top of all their other troubles Penric was injured, and since Desdemona drains his body for energy to fuel magic their magic is all tied up.

I won’t go into details about the plot, but it has a fun and spoiling it in the least will kinda ruin it. I’ll just say that Mira is one of Desdemona’s sub-personalities.

Highly recommended if you read the prior four novellas in this series as well as ‘The Curse of Chalion’. If not, I suggest you check out those first. I kid you not, the World of the Five God super-series is one of the best modern fantasy series.