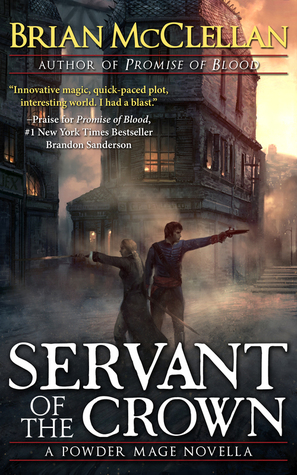 Servant of the Crown by Brian McClellan

Description: Captain Tamas is an ambitious young officer in the Adran army. As a commoner, he is one of very few without noble blood to hold a rank. When he challenges the son of a duke over an insult, the subsequent duel lands him in hot water with the nobility and the royal cabal of Privileged sorcerers. Tamas is soon drawn into a conflict that goes to the very highest office in the land, and his only ally is the most unlikely of people; a young noblewoman named Erika, who needs Tamas to teach her how to wield her powers as a powder mage.

Occurs about 35 years before the events in Promise of Blood.

Captain Tamas and Erika work together to defeat their political enemies

Following shortly on the heels of the novella Forsworn, SERVANT OF THE CROWN is an enthralling love story between two Gun Powder Mages. As you can imagine, it involves quite a lot of firing of guns.

When the Privileged of Adipest get a little big for their boots, Tamas is wrangled into putting them down a peg by the king. As a fan of the Powder Mage series, this book shows grumpy-old Tamas when he was still a grumpy young Tamas, and when he fell in love with his wife. Always a firebrand, Tamas gets himself in a lot of trouble with the local Elemental Sorcerers (called Privileged) after behaving rashly, and only with the help of his illicit lover/ noblewoman Erika can he find salvation.

I enjoyed it. Start with Forsworn or Promise of Blood first.