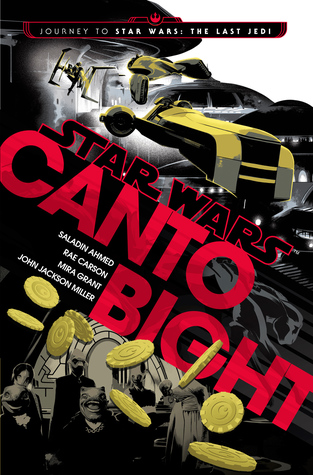 Description: Soon to be seen in Star Wars: The Last Jedi, welcome to the casino city of Canto Bight. A place where exotic aliens, captivating creatures, and other would-be high rollers are willing to risk everything to make their fortunes. Set across one fateful evening, these four interconnected stories explore the deception and danger of the lavish casino city.

– An honest salesman meets a career criminal as a dream vacation turns into the worst nightmare imaginable, in a story by Saladin Ahmed.

I listened to the audiobook of the first short story in this four-part anthology. Really, it was a novella written by Saladin Ahmed. It had good production values (read: music and sound effects) and good narration. The short story contained excellent plotting and pretty good narration.

The plot was about a water-fountain salesman who goes on vacation to Canto Bight, the glitziest glamorouriest tourist trap in all of Star Wars. He is immediately targeted as a rube by no less than a million con artists, intent on stealing everything he owns. One of the criminals after him is an assassin, who sees the salesmen as the perfect Manchurian Candidate-esque double agent needed to kill an unkillable victim.

The setting of Canto Bight was better realized here than it was in the movie. You really get to know the rotting, festering core of Canto Bight, as opposed to in ‘The Last Jedi’ where Canto Bight is just a random setting.

My biggest complaint with the one story was the relative bloodlessness of the characters. I don’t know if Disney were particularly hands-on with Saladin Ahmed’s work or what, but I wanted the assassin to be more assassin-y. For pity’s sake he was supposed to be a bloodthirsty killer, but when he was supposed to off the water-fountain salesman he felt guilty and didn’t do it.

I had fun reading it, and might read more of the anthology in the future. For now, I think I’ve had enough. Recommended for mega-Star Wars nerds.