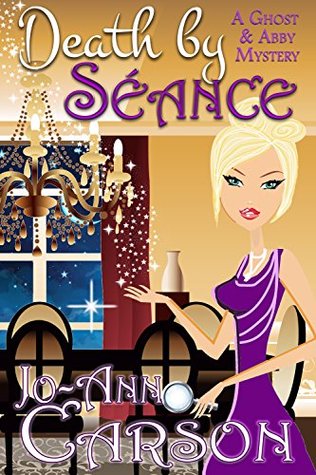 Death by Seance by Jo-Ann Carson

Love, Lies & Lust to Die For

Abby Jenkins, a single mother with a complex life, sorts out the murder of Kumar, the day man for a vampire, in Sunset Cove, the small Pacific Northwest town famous for all things that go bump in the night.
Abby is the night-janitor in the haunted teahouse and only private detective in town. She’s also a reluctant witch with major man-trouble. Blackmailed into attending a séance, she expects to wrestle with a cranky ghost or two, but instead finds herself in the middle of a murder.
Seven people attend the event, some human, some not- so-much. They have one thing in common: a murky past.
After Abby washes the blood off her hands, she’s left with her first whodunit. With the help of her partners in crime: Eric, the Viking ghost with existential issues; Dante, the local Casanova-man-witch; and Sparky, her snarky familiar, she digs into the secrets of the cove.
Will she survive to tell the tale?

I was given this book for free for the purpose of review.

Let’s start with the goods parts of this book.

I liked Abby. She’s a single mother of three children, struggling to get by as a night janitor/Private Investigator while raising toddlers. Her interactions with her children were the beating heart and soul of this story. Doing everything from spoiling them with pancakes to reading them bedtime stories, Abby was a very motherly main character.

I also liked the idea the story was advertised as. The concept of a Cozy Mystery Urban Fantasy has so much potential. The murder itself was a prototypical closed-room mystery: at a Seance the lights go out, and when they come back on someone is dead.

I liked Spark, Abby’s angry spirit animal/lynx familiar. Constantly insulting Abby and providing color commentary for the situation at hand, Spark was a hoot to have around.

I liked the author’s casual prose. Carson used a very personable style to write her book, relying on informal speech in her narrative sections. I liked it as a breathe of fresh air.

I enjoyed how the author was unafraid to show her influences on her sleeve. With constant references to Harry Potter, Buffy the Vampire Slayer and TruBlood, the author shows she knows her audience.

Okay, now to discuss what I didn’t really like.

The mystery wasn’t very… mysterious. I grew up reading Sherlock Holmes, Nero Wolfe, Hercule Poirot, Amelia Peabody, Jim Qwilleran and Goldie Han. I’ve read a lot of mystery books, so when I say the mystery was lacking I come from the perspective of someone who’s sampled the breadth of the genre. The main character solved the mystery via intuition, by following her gut. And you know what? That’s awful to read about. I like ‘fair play mysteries,’ mysteries which the audience can puzzle out for themselves. There was no way for me the reader to puzzle out the villain, because the main piece of evidence Abby used to solve the crime was the main character’s intuition.

Second, I need to make an admission: I don’t like Paranormal Romances. I’ve been burned in the past, when two of my favorite Urban Fantasy series transitioned  into Paranormal Romances and the protagonists suddenly got a lot less interesting. Far be it from me to tell authors how to write, but after a certain point I get fed up reading about main characters who are stuck in love polyhedrons. This book contained a lot of emotional torment for Abby trying to decide between two perspective lovers. If you like Paranormal Romances, then you would view this as a positive and not a negative.

Finally I did not like the protagonist’s miscarried pregnancy which occurred halfway through this book. Up until this point I was mostly enjoying the story as a slightly fun, slightly silly story about a woman trying to solve a murder at a freaking Seance. So when the miscarriage happened it ruined what was promising to be a cheerful and innocent story with a woman’s horrible trauma. It was at this point I really stopped innocently enjoying reading this.

Are you a mystery reader? Than this book probably won’t be for you. But if you like Paranormal Romances, then chances are you would like this book.