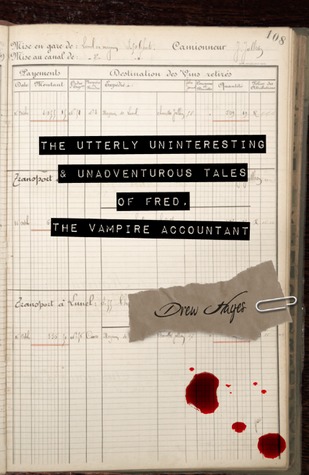 The Utterly Uninteresting and Unadventurous Tales of Fred, the Vampire Accountant by Drew Hayes

Some people are born boring. Some live boring. Some even die boring. Fred managed to do all three, and when he woke up as a vampire, he did so as a boring one. Timid, socially awkward, and plagued by self-esteem issues, Fred has never been the adventurous sort.

One fateful night – different from the night he died, which was more inconvenient than fateful – Fred reconnects with an old friend at his high school reunion. This rekindled relationship sets off a chain of events thrusting him right into the chaos that is the parahuman world, a world with chipper zombies, truck driver wereponies, maniacal necromancers, ancient dragons, and now one undead accountant trying his best to “survive.” Because even after it’s over, life can still be a downright bloody mess

Born of the parents Hitchhikers Guide to the Galaxy and Harry Dresden, Fred the Vampire Accountant is more than the sum of his parts. With absurdist humor and modern Urban Fantasy goodness, this is a pseudo-anthology of five tales of daring-do and ridiculousness.

Fred died, and was reborn a bloodthirsty monster. Being innately cowardly and disinclined from changing his habits, Fred showed up to work the next day to file some taxes. Being too wimpy to hunt down and kill people, Fred commits tax fraud on behalf of a hospital in return for some blood.

The story begins when Fred, against his better judgement, goes to his ten year Highschool reunion. A super-nerd when he was  a high school student, he used to hang out with other nerds- namely Crystal. Crystal has transformed from an ugly duckling into a beautiful swan… but she’s also gotten a job as a supernatural monster hunter. Thus begins a love story told in five parts, with Fred the awkward vampire dating Crystal the hyper-efficient government vampire killer.

This ‘novel’ is really an anthology of five interconnected novellettes. The first is the story of a Highschool reunion which is crashed by bloodthirsty werewolves. The second is a LARP-fest gone horribly wrong. The third is a Vegas jousting-tournament, with Fred riding a gay were-pony. The forth has Fred and the Gang going out to find a kidnapped local mage/school teacher. The fifth is a ‘wholesome’ Christmas story, where the Gang has to go save Crystal (instead of being saved by crystals) and get revenge against Fred’s vampire daddy.

Constructive criticism: I would have liked one long novel instead of five interconnected novellas. The author repeated a lot of information repeatedly, and there was very little character growth because of the constantly restarting plot.

Next bit of constructive criticism, one of the bad guys was an evil vampire doing evil vampire things. I’ve read this trope literally a dozen times before and it bored the cliches out of me.

Highly recommended. It was funny, and short enough that the humor didn’t begin to drag.