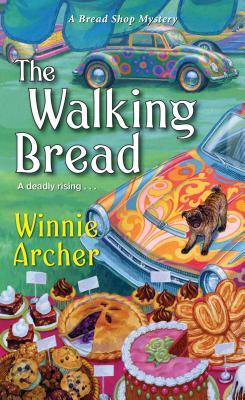 Santa Sofia: Come for the tasty bread, stay for the murders

I received this book for free for the purpose of an impartial review.

This was the most fun I’ve had reading a cozy in a long time. The author’s prose is approachable and fun, while still conveying the seriousness of the situation at hand. The book even had one or two wholesome moments which are nice to read. Net total of this book was a fast and easy read which I Highly Recommend.

Ivy Culpepper, the protagonist, must save her brother from being falsely imprisoned after his sworn nemesis is found dead. Ivy had plenty of agency in this book, which is a criticism I have of a lot of other mystery books. Ivy goes out of her way to save her brother against impossible odds of a system stacked against her. I liked her, she was very charming. Ivy’s partner-in-crime-solving Mrs. Branford, an octogenarian Archie Goodwin, was even more fun because she had a devil-may-care attitude about solving the crime.

The plot was also very good. As is the case with most cozy mysteries, the premise is innately ridiculous: there is a murder at a themed car festival. The victim is found dead inside his zombie-themed car, and Ivy’s brother is implicated by evidence planted on the site. Ivy and Branford must team up to find the real killer after the cops rushed through their investigative process and failed to see through the planted evidence. Ivy must find the dead man’s enemies (here’s a hint: there are a LOT of enemies) and discover which one killed him.

The pacing was very good as well. While it was never what I would call ‘seat of your pants reading,’ THE WALKING BREAD was fun and I read it pretty much cover to cover in two days. The author successfully conveys a sense of urgency which made the book very gripping. Our hearts were in our throats as we were afraid that Ivy’s struggling family would collapse because of the false imprisonment of her brother.

I always like to include some constructive criticism at the end of all my reviews. For this book I have just one thing, however it is fairly major spoilers so sign off here if you don’t want to be spoiled.

My chief complaint was that this book was not a Fair Play mystery. Fair Play mysteries are mysteries which the reader can figure out the killer before the protagonist because the evidence is all there waiting to be put together. I, the reader, lacked a key piece of evidence until after the protagonist got it. The final piece of evidence only became available at the climax of the book, so there is no way for me the reader to figure out who the bad guy was until after the protagonist. It’s a small complaint, but significant in its own way.

As I said previously I do Highly Recommend this book. The characterization was strong, the plot was strong, and the pacing was great. If you’re in the mood for a fun, reasonably light cozy mystery consider checking this out.