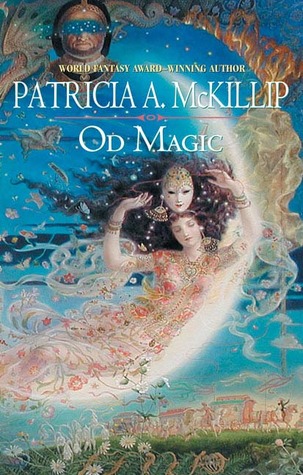 I Recommend this to people who want to read a high quality fantasy book with a few fairy tale elements.

OD MAGIC is a magic school story, but unlike any I’ve ever read before. None of the POV characters are actual students at the magical students, but instead they are the school’s teachers and gardeners instead. The school of wizardry is a carefully controlled branch of the government, where any anarchists and traitors are carefully weeded out before they can cause trouble for the government. All magic is carefully circumscribed and controlled, so only permitted magics are allowed in the kingdom of Numis.

This is a non-violent High Fantasy book, so if you’re interested in spectacular wizards doing awesome stuff without hurting people, check it out.

Characters: I usually complain that McKillip’s characters being more archetypes than people. In this case, I think the characters are actually pretty good. Brendan is a depressed country bumpkin who tried to turn his life around by going to the big city. The Princess feels stepped upon and used by her powerful family. A illegal wizard and the police warden fall in love, despite the law which separates them. Even the ‘evil’ wizard antagonist was just a socially clumsy man who was raised to believe the wrong things. They weren’t spectacular characters like Kvothe or Ista or Ammar/Rodrigo, but I’ll remember them.

Plot: The plot was a cautionary tale for people always assuming the worse about ‘dangerous’ elements in society. All unauthorized forms of magic are outlawed, even small magics like those a country witch or a street magician would perform. As a result of this authoritarian law, anything which even resembles magic is highly controlled. I liked the plot.

Pacing: The book never slowed down.

Prose: It’s a McKillip book. She is the best author in terms of prose in the Fantasy Genre who is currently writing. Read this book if you like awesome prose. Her descriptions of magic are truly magical.

The author used some tired tropes, in particular the princess being forced to get married to a man she hates.

The plot would have fallen apart if the characters actually talked and listened to one another.

The fact that the bad guys always assumed the worst about all the good guys got a little repetitive.

The finale involves a major Deus ex Machina. McKillip’s endings often fall flat for me. This is one such book. I’m one of her fans so I’m biased in her favor, so I’m just being honest.

Net total, awesome book. I Highly Recommend this to anyone looking for a fun parable about an oppressive government repressing art/strange people because they don’t understand them. I just Recommend this to people who like fantasy books but aren’t into a non-violent fairy tale about freedom from oppression. The ending is a bit ‘meh,’ but that’s not enough to hold it back. (If the author wrote an excellent ending to cap off the intriguing plotlines, this would have been a sensational story.)