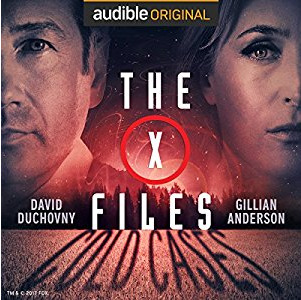 Getting the Gang Back Together

I’ve watched maybe 2 X-Files episodes ever, so I’m not a fan of this franchise. I was able to listen to this book for free, so I decided to give it a whirl. I had fun listening to it, and would Recommend it to anyone who is a) a fan of the franchise, b) a fan of conspiracy theories, or c) a fan of Radio Plays/Radio Dramas.

This isn’t a traditional audiobook, but a Radio Play. The audio edition of this contains only dialog and sound FX. The sound FX of this were really well done by audiobook standards, which is important because the FX carried the narrative on it’s back. There was no narrative voice, no dialog tags, no authorial voice- only dialog and FX. Listen to a sample if you’re curious. I suspect not everyone will like this.

Next, the original cast of the show were recruited to reprise their characters. You have Scully and Mulder played by their original actors, as well as a full cast of at least three or four other actors (and maybe more). It really added to the quality of the drama because full cast audios are always excellent.

Okay, now for the bad bits.

The Scully and Mulder (aka Duchovny and Anderson) kinda phoned it in a bit. On one hand I liked it because their ‘not taking this seriously’ attitude added a kinda delightful cheesyness to the audiobook… but on the other hand I can see a fan who takes this franchise seriously might not like it.

There were 5 or 6 ‘episodes’ which made up this audiobook. However only 1 or 2 were really good, while the rest were a bit meh.

Net total I liked it a lot. As I said, I Recommended it.