Today I’m going to be discussing and explaining the Five Act Structural Format. Let’s not beat about the book, and get right into it.

For this blogpost, I suggest you read this article on the subject in order to provide more insight on this subject. 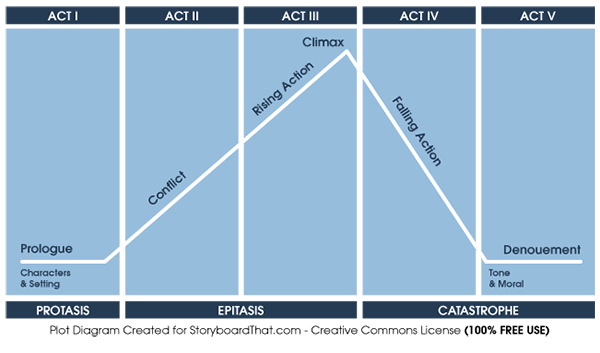 The purpose of this format, like all other structural tools, is to provide a useful shorthand for the design of a story you’re writing. What separates this format (in my opinion) from the others is a distinct before/after midpoint structure. If you have an important plot point in the center of your story which defines/redefines the nature of your story, such as an important incident of character development, then you might consider using this structural tool to study your story.

According to the linked article above, this was the format that Shakespeare used, so it has that going for it too.

I will be citing ‘Harry Potter and the Philosopher’s Stone/Sorcerer’s Stone’, and ‘Lord of the Rings: Fellowship of the Ring’ as examples for using this format- repeats from my Hero’s Journey explanation. Why? Because I wanted to prove that these are analytical tools can provide different information from the same text. (THAT SAID, I also tried to use this tool to study Star Wars again, but I found that the 5-Act structure didn’t apply to A New Hope.)

I will also cite ‘The Rage of Dragons’ by Evan Winter, to provide an additional example.

Finally, I will also cite ‘Romeo and Juliet’ as well as the MCU’s ‘Ironman.’ I did not discover these as examples myself; I’m deriving them from the linked article above. I suggest you read that article.

In this act, the author explores the status quo of their protagonists, setting, and pre-existing conflicts within the setting. In the Hero’s Journey format, the equivalent to this Act would be the ‘Normal Life’ section which begins the story. This Act is equivalent to the first half of the first act of the Three Act Format.

As you write this act (or re-write it), focus on showing the world pre-plot. Provide a contrast to the character development which will eventually happen. It is also helpful to include a pre-existing conflict in this act (such as an oppressive regime people are rebelling against, or a student struggling to pass a class, or a failing marriage).

Act 2: A Challenge to the Status Quo

Compared with the Hero’s Journey format, this Act mirrors everything between the ‘Call to Adventure’ and ‘Searching for the Plot’ Acts. Compared to the Three Act Format, this act is equivalent to the second half of the first act, and part of the second act. The setting and characters are changing, and the tension is beginning to build up.

Act 3: The Turning Point/ The Road of Trials

Things get even worse. In act 2 the status quo is upset, but the story was not yet been thrown into chaos. In act 3, the chaos begins. This is the point in the story when the protagonists say, ‘Either I step up, or we suffer.’ Maybe the protagonist had a revelation in act 2, and in act three says ‘I am going to be a better person now.’ In this act the conflicts generated in the second act have their initial consequences… and those consequences often make the plot more complicated.

Emotional stakes are what makes a story compelling, so don’t neglect adding them to a story! Just remember that Act 2 is where where the emotionally compelling conflict is initiated, and Act 3 is a follow-through on that conflict.

To quote the article I’ve linked:

(The Turning Point Act)’S A WAY TO HIT THE AUDIENCE WITH CLIMAX-LIKE DRAMA BEFORE THEY’RE READY FOR IT. BEFORE THEY EXPECT IT. AND IT’S NOT MERE “GOTCHA” TACTICS. IF DONE RIGHT, YOU CAN CREATE THE KIND OF EMOTION TO CARRY YOU RIGHT THROUGH TO THE END.

SHAKESPEARE’S 3RD ACTS WERE OFTEN FILLED THEM WITH SUCH MOMENTS OF STORYTELLING BEAUTY: GREAT INVERSIONS OF FORTUNE. BEST INTENTIONS GONE AWRY. DEATHS! LOSS! CONFUSION! SUDDEN CHAOS! EVEN THOUGH THESE 3RD ACTS DON’T FINISH THE ARC OF THE WHOLE STORY, THEY ARE OFTEN THE MOST RESONANT MOMENTS AND THEY ARE STILL CLIMAX-WORTHY IN SCALE.

Act 4: Escalation of the Challenge

In this Act we begin to gain narrative momentum leading to the final climax, the resolution of the plot, and the release of tension. But before we can release tension, we must first escalate it!

At the end of the previous act, your protagonists were given setbacks; their initial plans to fulfill the external plot have been stymied by those failures. Now they have to play fast and loose with the rules to complete the external plot. The point of this act is TENSION! You want your heroes to suffer setbacks so they go into the climax as underdogs.

Usually, this is a character focused act. The heroes suffered a setback in the last chapter, and are now on their heels as they suffer from the physical and emotional fallout of the last Act.

For most stories, this act should be the shortest. Most of the character development should have happened in the previous acts or the final act, so focus on adding as much tension as you can as you can in as short a time as possible.

And the end has come. It’s time for the final battle (if you’re writing a battle-y book), and the resolution of the plot. The tension of the story builds to a breaking point, and then it resolves. All the foreshadowing you’ve set up in the early parts of the story (should hopefully) pay off. All the lose plot threads should be tied off.

The protagonist uses the tools they’ve gained from the two parallel plotlines to either succeed or fail in their final conflict. Remember that the two parallel plotlines are the internal, character-based plotline (such as learning to trust people, or overcoming an emotion trauma as examples), while the external plotline is the main and obvious plotline of the story (defeating the Big Bad of the fantasy story, catching the criminal in a mystery story, the successful resolution of the relationship in the romance).

In other sources, you might find the Five Act Format refer to the acts in a different way. Here they are: Prelude, Prostasis, Epistasis, Catastasis and Catastrophe.

Prelude: This is the first part of the story. In the five act format I’ve described above, it’s Act 1.

Prostasis: This is equal to Act 2 in the 5 Act Format.

Epistasis: This is the main chunk of the storytelling. In the five act format, it’s Acts 3.

Catastasis: Is the equivalent of Act 4 in my five act format. In the Catastasis phase the plot and drama of the Epistasis phase is further heightened.

Catastrophe: This is the equivalent of Act 5, where the plot lines resolve. While Catastrophe has a negative connotation today, it refers to any ending, both positive or negative. You may also hear this referred to as the Eucatastrophe, for positive outcomes only.

These words were originally used in the context of Ancient Greek plays, hence accounting for the use of Greek words. You might see other sources apply the terms slightly differently, and that’s fine. What matters is that you understand the general principle behind how they are applied.

And finally, let’s take a moment to talk about Freytag’s Pyramid.

I got this image off of Wikipedia.

Each of these points is equivalent to the 5 Acts of the novel I’ve talked about above, but with slightly different emphasis. Freytag designed this pyramid in the context of Greek Plays, and such plays often featured the context of fate.

In Act 1, aka the Introduction, the characters of the play and the stakes of their everyday lives are introduced.

In Act 2, aka Rising Action, the everyday lives of the characters are disrupted by an outside force.

In Act 3, the Narrative Climax, the characters have to make choices which they will never be able to take back. Those choices determine their fate for the rest of the story.

In Act 4, aka Falling Action, the characters have become trapped by their fates but aren’t yet aware of it.

In Act 5, the Catastrophe, the characters become aware of their fates, the plots resolve.

In this format, the focus of the story is on Act 3, with Acts 4 and 5 containing a sense of foreboding and anticipation for the inevitable doom of the characters. All choices made by the characters after Act 3 have little impact on the plot as a result. For us modern readers, who like reading novels suspenseful to the very last page, this Act 3 Climax storytelling style isn’t as popular as the Act 5 Climax storytelling style. However you should be aware that this style does exist, if you want to try it out.

And that’s a wrap! Five act format is very useful in providing a slightly non-standard format for your narrative. Are you trying to write a novel, or are you having trouble editing a novel? Maybe you’re having narrative problems, which a format like this can solve.

The Avengers- Defining an Act- Lessons from the Screenplay

And, again, I suggest you check out this article on the subject by Film Crit Hulk. It was by far the most insightful source I found.