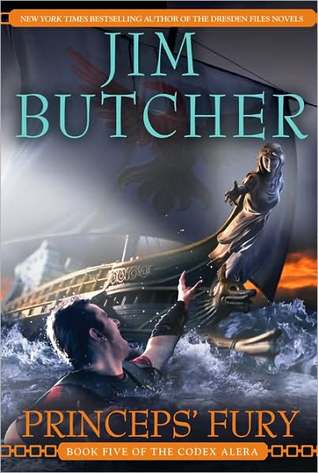 From the New York Times bestselling author of Captain’s Fury and the Dresden Files novels.

Tavi of Calderon, now recognized as Princeps Gaius Octavian and heir to the crown, has achieved a fragile alliance with Alera’s oldest foes, the savage Canim. But when Tavi and his legions guide the Canim safely to their lands, his worst fears are realized.

The dreaded Vord – the enemy of Aleran and Cane alike – have spent the last three years laying waste to the Canim homeland. And when the Alerans are cut off from their ships, they find themselves with no choice but to fight shoulder to shoulder if they are to survive.

For a thousand years, Alera and her furies have withstood every enemy, and survived every foe.

The thousand years are over…

The maw of the Vord consumes all

Jim Butcher is probably the best plot and dialog author currently writing Fantasy genre, and his characters are among the best too. His books aren’t what I’d call literary tour-de-forces- his prose is very workmanly and he uses tropes played fairly straight. But his books are fun to read and he uses both foreshadowing and unexpected plot twists masterfully.

This is probably the most fun I’ve had while reading one of his Alera books. I don’t think it’s his best Alera book- I give that credit to Academ’s Fury because I found the crime-thriller plot to be more special. But fun… well, this book was very fun to read.

Butcher’s greatest asset is his ability to write combat and action, and this book contained a LOT of action. We have Tavi in werewolf-land fighting against the Vord, we have Immara in the north trying to broker a peace deal with the snowmen when her own faction wants war, and we have the Lords of Alera in the Amaranth Vale fighting another hive of Vord. Reading this really makes me want Butcher to write some straight up Military Fantasy.

His characters are all smart, both good guys and bad guys. The good guys use cunning and use trickery to solve their problems. The bad guys are usually even more clever, which makes for interesting plot twists. Now I’ll admit that sometimes the bad guys in Butcher’s books are ‘Evil McTwirly Mustache Man’, but by and large their intelligence makes up for their fairly selfish or counterproductive motivations.

The plot of this novel was particularly good. With both Canaea and Alera being devoured by the Vord threat, ancient enemies must come together in the name of mere survival. And yet the shared enemies aren’t enough to bring together people: there is still friction and outright fighting between humans and werewolves and icemen. People are captured and even killed when an armistice is declared against the greater threat of the Vord invasion, causing the armistice to nearly be broken and the Vord to win.

But time for some constructive criticism. Like a lot of Butcher books this book follows a formula, a formula requiring a massive fight scene at the end of each and every book. It’s a good fight scene, but a predictable one because the good guys always win. Next, I don’t think that Butcher reliably does character development in-novels very well. He does a great job of character development over the course of an entire series, but not in the short span of a single book.

Finally, the good guys never completely and utterly lose. This book is supposed to be the darkness before the dawn, the nadir of the series, but the good guys never lose. The good guys retreat and lose lives and lose battles, but they never have their asses handed to them. The good guys manage to pull off their ridiculously unlikely plans and survive to tell the tale each and every single time- which gets predictable. There is never a moment of complete hopelessness, which I think would make the books stronger.

Highly recommended… but this is book 5 in a six book series. Start with book one.