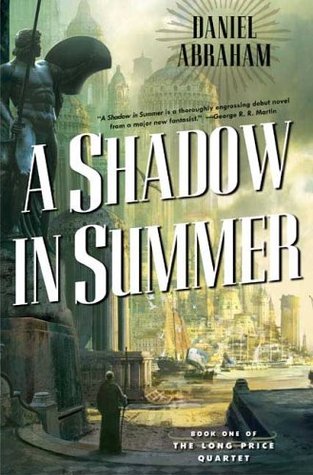 A Shadow in Summer by Daniel Abraham

The city-state of Saraykeht dominates the Summer Cities. Its wealth is beyond measure; its port is open to all the merchants of the world, and its ruler, the Khai Saraykeht, commands forces to rival the Gods. Commerce and trade fill the streets with a hundred languages, and the coffers of the wealthy with jewels and gold. Any desire, however exotic or base, can be satisfied in its soft quarter. Blissfully ignorant of the forces that fuel their prosperity, the people live and work secure in the knowledge that their city is a bastion of progress in a harsh world. It would be a tragedy if it fell.

Saraykeht is poised on the knife-edge of disaster.

At the heart of the city’s influence are the poet-sorcerer Heshai and the captive spirit, Seedless, whom he controls. For all his power, Heshai is weak, haunted by memories of shame and humiliation. A man faced with constant reminders of his responsibilities and his failures, he is the linchpin and the most vulnerable point in Saraykeht’s greatness.

Far to the west, the armies of Galt have conquered many lands. To take Saraykeht, they must first destroy the trade upon which its prosperity is based. Marchat Wilsin, head of Galt’s trading house in the city, is planning a terrible crime against Heshai and Seedless. If he succeeds, Saraykeht will fall.

Amat, House Wilsin’s business manager, is a woman who rose from the slums to wield the power that Marchat Wilsin would use to destroy her city. Through accidents of fate and circumstance Amat, her apprentice Liat, and two young men from the farthest reaches of their society stand alone against the dangers that threaten the city.

Seedless takes a pose of conspiracy

I liked this one! After reading ‘The Dragon’s Path’ and not really enjoying it, ‘The Shadow in Summer’ was a pleasant surprise.

I liked the characters. Amat, the grandmotherly business manager who has fingers in the most dangerous pies of all the Summer Cities, was my favorite character. Forced out on her ass just as her boss’s conspiracy comes to fruition, she struggles to make ends meet cooking the books for a local whoremonger. The three other main characters I still enjoyed more than your average protagonist, but not quite as much. Seedless the demiurge was a fascinating character- I liked his determination and fickleness. Plus he had great dialog.

The plot was intricate. To be honest, not much happens for most of the story. This isn’t a combat heavy book, but there is tension and there is plot development. This book has a heavy conspiracy and crime-based theme, which I really liked… but I can easily understand if someone else wouldn’t like it. This book has Fiscal Fantasy themes, with characters using magic to influence the overall economy and state of politics.

Pacing. Ah, the pacing. It doesn’t have a slow start as much as a slow throughout. There’s heavy drama and death, but it’s never overwrought. Get ready for a slow and steady book. (After reading this and The Dragon’s Path I’m lead to believe that the author has a thing for leisurely storytelling).

The prose is good- I’d say it’s on the stained-glass side of the stained glass/windowpane paradigm. The prose wasn’t ostentatiously beautiful, but functionally so.

The setting and worldbuilding had it’s positives and negatives. On the positive side was the weird magic. Basically the ‘poets’ of the setting could use magic to create anthropomorphic manifestations of concepts which they then enslave- the character Seedless is an example of an enslaved fertility deity. The enslaved andats want nothing more than to be freed from enslavement, so they will do everything in their power to kill their masters or trick them into releasing their bonds. This was really cool.

Now for some constructive criticism.

Unfortunately everything else about the setting was a bit generic. It all seemed like a fairly standard medieval European civilization surrounding this one weird magic trick, with everything from whorehouses to taverns to palaces. I would have liked it if the Khaiate was more unique. It pales in comparison to Alt Coulumb of the Craft Sequence or Ankh-Morpork of Discworld, for example.

And finally my biggest criticism: it was long. Honestly this book could have been broken in half and made into two books. Or, if you want to be brutally honest, an editor could have trimmed out 30%->40% of this book’s pagecount and still made a functional story. As it is this book is really big with very little action. I skimmed to get through some talky bits just to get to some faster paced parts.

Recommended. If it was just a little bit shorter I would have given it a highly recommended. This was a good book, nearly a great book, so if you’re looking for something good to read check this out. Just be ready for a lot of talking heads.